The inner two degrees of the Milky Way. Evidence of a chemical difference between the Galactic Center and the surrounding inner bulge stellar populations

Context. Although there have been numerous studies of chemical abundances in the Galactic bulge, the central two degrees have been relatively unexplored due to the heavy and variable interstellar extinction, extreme stellar crowding, and the presence of complex foreground disk stellar populations.
Aims: In this paper we discuss the metallicity distribution function, vertical and radial gradients, and chemical abundances of α-elements in the inner two degrees of the Milky Way, as obtained by recent IR spectroscopic surveys.
Methods: We used a compilation of recent measurements of metallicities and α-element abundances derived from medium-high resolution spectroscopy. We compare these metallicities with low-resolution studies.
Results: Defining "metal-rich" as stars with [Fe/H] > 0, and "metal-poor" as stars with [Fe/H] < 0, we find compelling evidence for a higher fraction (∼80%) of metal-rich stars in the Galactic Center (GC) compared to the values (50-60%) measured in the low latitude fields within the innermost 600 pc. The high fraction of metal-rich stars in the GC region implies a very high mean metallicity of +0.2 dex, while in the inner 600 pc of the bulge the mean metallicity is rather homogenous around the solar value. A vertical metallicity gradient of -0.27 dex kpc-1 in the inner 600 pc is only measured if the GC is included, otherwise the distribution is about flat and consistent with no vertical gradient.
Conclusions: In addition to its high stellar density, the Galactic center/nuclear star cluster is also extreme in hosting high stellar abundances, compared to the surrounding inner bulge stellar populations; this has implications for formation scenarios and strengthens the case for the nuclear star cluster being a distinct stellar system. 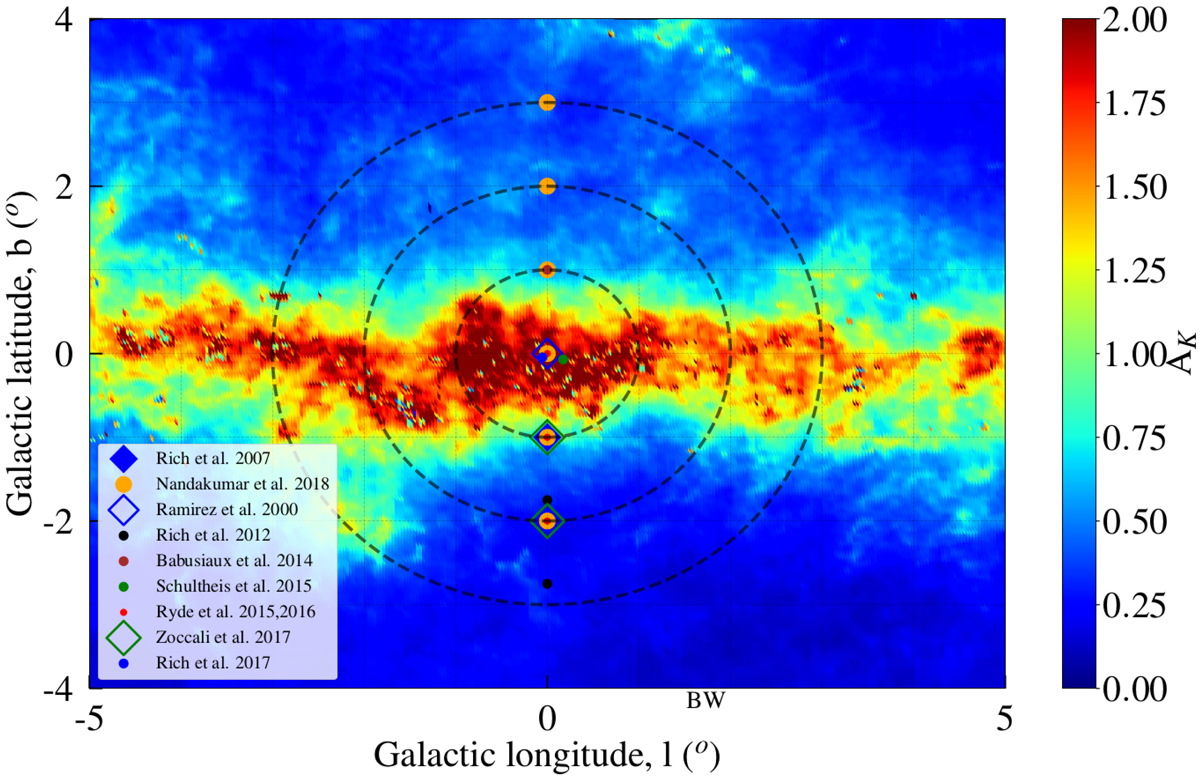