The ALMA-PILS survey: gas dynamics in IRAS 16293-2422 and the connection between its two protostars

Context. The majority of stars form in binary or higher order systems. The evolution of each protostar in a multiple system may start at different times and may progress differently. The Class 0 protostellar system IRAS 16293-2422 contains two protostars, "A" and "B", separated by 600 au and embedded in a single, 104 au scale envelope. Their relative evolutionary stages have been debated.
Aims: We aim to study the relation and interplay between the two protostars A and B at spatial scales of 60 au up to 103 au.
Methods: We selected molecular gas line transitions of the species CO, H2CO, HCN, CS, SiO, and C2H from the ALMA-PILS spectral imaging survey (329-363 GHz) and used them as tracers of kinematics, density, and temperature in the IRAS 16293-2422 system. The angular resolution of the PILS data set allows us to study these quantities at a resolution of 0.5'' (60 au at the distance of the source).
Results: Line-of-sight velocity maps of both optically thick and optically thin molecular lines reveal: (i) new manifestations of previously known outflows emanating from protostar A; (ii) a kinematically quiescent bridge of dust and gas spanning between the two protostars, with an inferred density between 4 × 104 cm-3 and 3 × 107 cm-3; and (iii) a separate, straight filament seemingly connected to protostar B seen only in C2H, with a flat kinematic signature. Signs of various outflows, all emanating from source A, are evidence of high-density and warmer gas; none of them coincide spatially and kinematically with the bridge.
Conclusions: We hypothesize that the bridge arc is a remnant of filamentary substructure in the protostellar envelope material from which protostellar sources A and B have formed. One particular morphological structure appears to be due to outflowing gas impacting the quiescent bridge material. The continuing lack of clear outflow signatures unambiguously associated to protostar B and the vertically extended shape derived for its disk-like structure lead us to conclude that source B may be in an earlier evolutionary stage than source A. 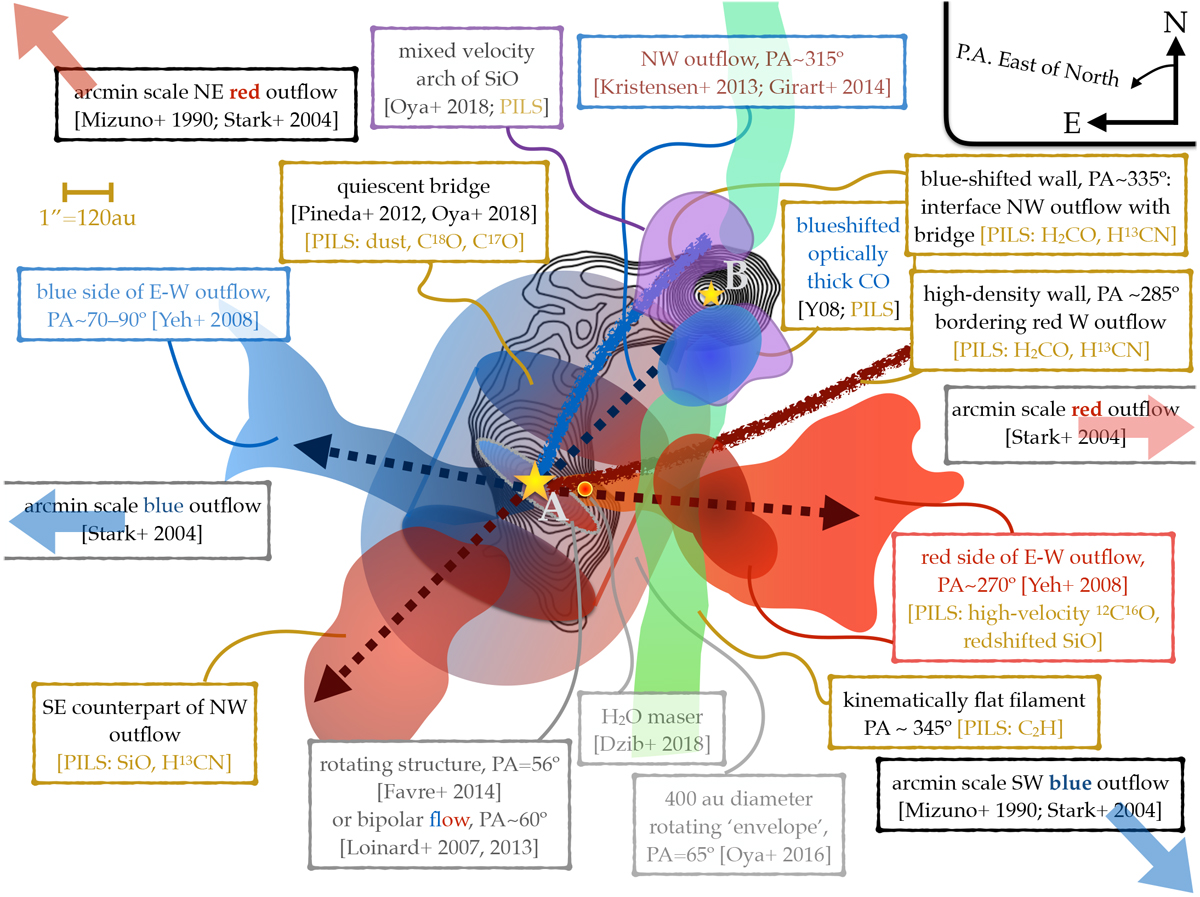