Context. Any viable cosmological model in which galaxies interact predicts the existence of primordial and tidal dwarf galaxies (TDGs). In particular, in the standard model of cosmology (ΛCDM), according to the dual dwarf galaxy theorem, there must exist both primordial dark matter-dominated and dark matter-free TDGs with different radii.
Aims: We study the frequency, evolution, and properties of TDGs in a ΛCDM cosmology.
Methods: We use the hydrodynamical cosmological Illustris-1 simulation to identify TDG candidates (TDGCs) and study their present-day physical properties. The positions of galaxies in the radius-mass plane, depending on their nonbaryonic content, are compared with observational data and other simulations. We also present movies on the formation of a few galaxies lacking dark matter, confirming their tidal dwarf nature. Tidal dwarf galaxy candidates can however also be formed via other mechanisms, such as from ram-pressure-stripped material or, speculatively, from cold-accreted gas.
Results: We find 97 TDGCs with Mstellar > 5 × 107M⊙ at redshift z = 0, corresponding to a co-moving number density of 2.3 × 10-4 h3 cMpc-3. The most massive TDGC has Mtotal = 3.1 × 109 M⊙, comparable to that of the Large Magellanic Cloud. Tidal dwarf galaxy candidates are phase-space-correlated, reach high metallicities, and are typically younger than dark matter-rich dwarf galaxies.
Conclusions: We report for the first time the verification of the dual dwarf theorem in a self-consistent ΛCDM cosmological simulation. Simulated TDGCs and dark matter-dominated galaxies populate different regions in the radius-mass diagram in disagreement with observations of early-type galaxies. The dark matter-poor galaxies formed in Illustris-1 have comparable radii to observed dwarf galaxies and to TDGs formed in other galaxy-encounter simulations. In Illustris-1, only 0.17 percent of all selected galaxies with Mstellar = 5 × 107-109 M⊙ are TDGCs or dark matter-poor dwarf galaxies. The occurrence of NGC 1052-DF2-type objects is discussed. 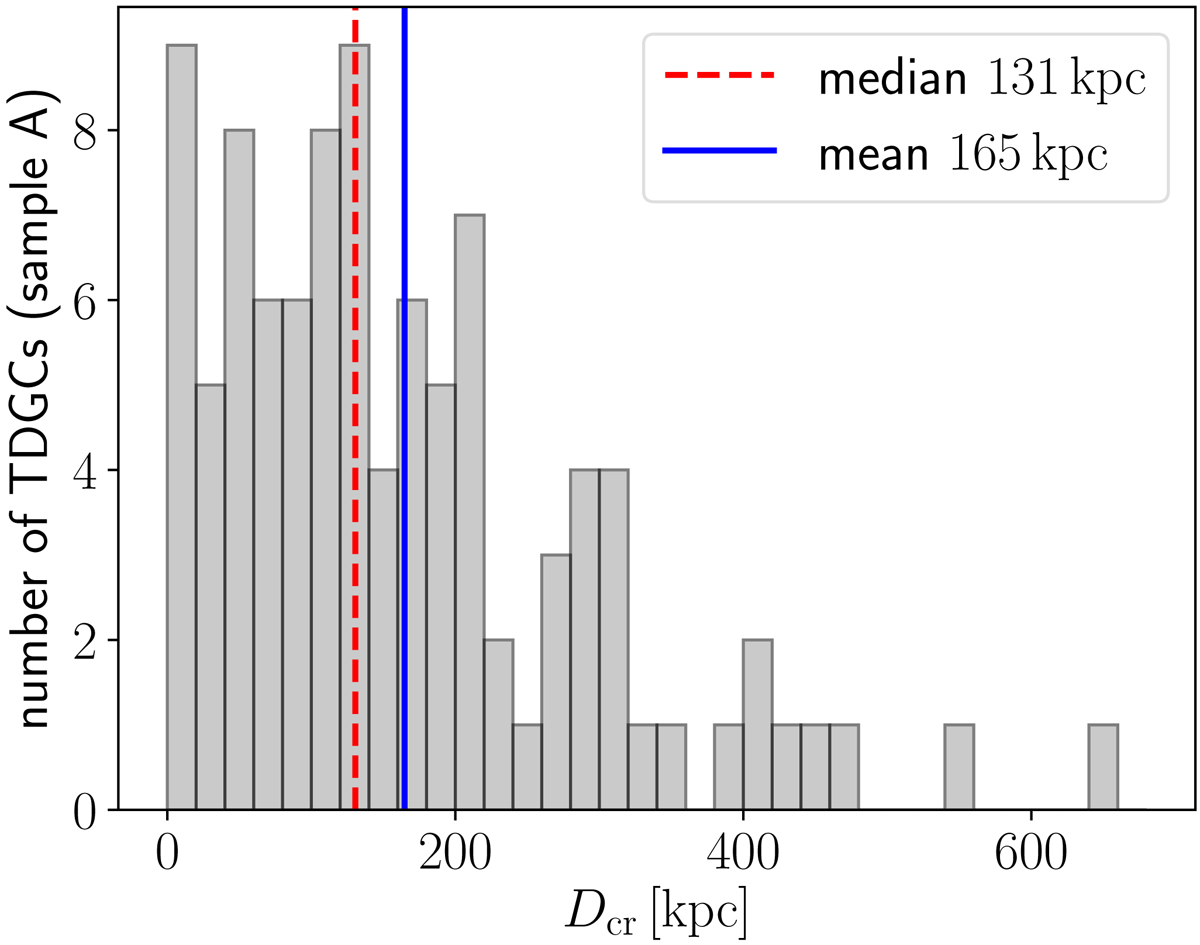