Context. Photometric surveys of galaxy clusters have revealed a large number of ultra compact dwarfs (UCDs) around predominantly massive elliptical galaxies. Their origin is still debated as some UCDs are considered to be the remnant nuclei of stripped dwarf galaxies while others seem to mark the high-mass end of the star cluster population.
Aims: We aim to characterize the properties of a UCD found at very close projected distance (rwproj = 1.1 kpc) from the centre of the low-mass (M ∼ 1010 M⊙) early-type galaxy FCC 47. This is a serendipitous discovery from MUSE adaptive optics science verification data. We explore the potential origin of this UCD as either a massive cluster or the remnant nucleus of a dissolved galaxy.
Methods: We used archival Hubble Space Telescope data to study the photometric and structural properties of FCC 47-UCD1. In the MUSE data, the UCD is unresolved, but we used its spectrum to determine the radial velocity and metallicity.
Results: The surface brightness of FCC 47-UCD1 is best described by a single King profile with low concentration C = Rt/Rc ∼ 10 and large effective radius (reff = 24 pc). Its integrated magnitude and blue colour (Mg = -10.55 mag, (g - z) = 1.46 mag) combined with a metallicity of [M/H] = -1.12 ± 0.10 dex and an age > 8 Gyr obtained from the full fitting of the MUSE spectrum suggests a stellar population mass of M* = 4.87 × 106 M⊙. The low S/N of the MUSE spectrum prevents detailed stellar population analysis. Due to the limited spectral resolution of MUSE, we can only give an upper limit on the velocity dispersion (σ < 17 km s-1), and consequently on its dynamical mass (Mdyn < 1.3 × 107 M⊙).
Conclusions: The origin of the UCD cannot be constrained with certainty. The low metallicity, old age, and magnitude are consistent with a star cluster origin, whereas the extended size is consistent with an origin as the stripped nucleus of a dwarf galaxy with a initial stellar mass of a few 108 M⊙. 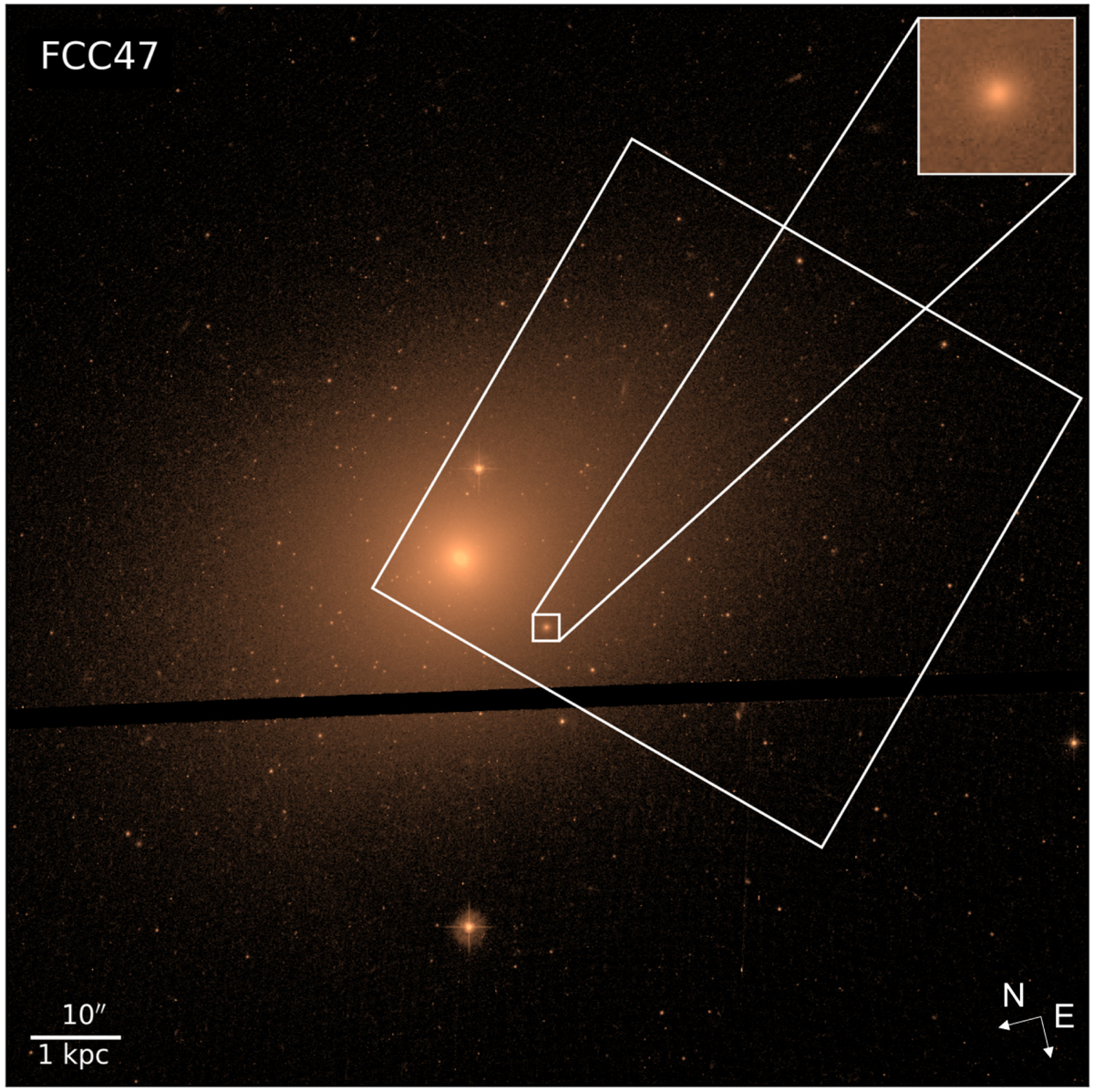