The survey of planetary nebulae in Andromeda (M 31). I. Imaging the disc and halo with MegaCam at the CFHT

Context. The Andromeda (M 31) galaxy subtends nearly 100 square degrees on the sky. Any study of its halo must therefore account for the severe contamination from the Milky Way halo stars whose surface density displays a steep gradient across the entire M 31 field of view.
Aims: Our goal is to identify a population of stars firmly associated with the M 31 galaxy. Planetary nebulae (PNe) are one such population that are excellent tracers of light, chemistry, and motion in galaxies. We present a 16 square degree survey of the disc and inner halo of M 31 with the MegaCam wide-field imager at the CFHT to identify PNe, and characterise the luminosity-specific PN number and PN luminosity function (PNLF) in M 31.
Methods: PNe were identified via automated detection techniques based on their bright [O III] 5007 Å emission and absence of a continuum. Subsamples of the faint PNe were independently confirmed by matching with resolved Hubble Space Telescope sources from the Panchromatic Hubble Andromeda Treasury and spectroscopic follow-up observations with HectoSpec at the MMT.
Results: The current survey reaches two magnitudes fainter than the previous most sensitive survey. We thus identify 4289 PNe, of which only 1099 were previously known. By comparing the PN number density with the surface brightness profile of M 31 out to ̃30 kpc along the minor axis, we find that the stellar population in the inner halo has a luminosity-specific PN number value that is seven times higher than that of the disc. We measure the luminosity function of the PN population and find a bright cut-off and a slope consistent with previous determinations. Interestingly, it shows a significant rise at the faint end, present in all radial bins covered by the survey. This rise in the M 31 PNLF is much steeper than that observed for the Magellanic clouds and Milky Way bulge.
Conclusions: The significant radial variation of the PN specific frequency value indicates that the stellar population at deprojected minor-axis radii larger than ̃10 kpc is different from that in the disc of M 31. The rise at the faint end of the PNLF is a property of the late phases of the stellar population. M 31 shows two major episodes of star formation and the rise at the faint end of the PNLF is possibly associated with the older stellar population. It may also be a result of varying opacity of the PNe.

Based on observations obtained with MegaCam, a joint project of the CFHT and CEA/DAPNIA, at the Canada-France-Hawaii Telescope (CFHT), which is operated by the National Research Council (NRC) of Canada, the Institut National des Sciences de l'Univers of the Centre National de la Recherche Scientifique (CNRS) of France, and the University of Hawaii. The observations at the CFHT were performed with care and respect from the summit of Maunakea which is a significant cultural and historic site. 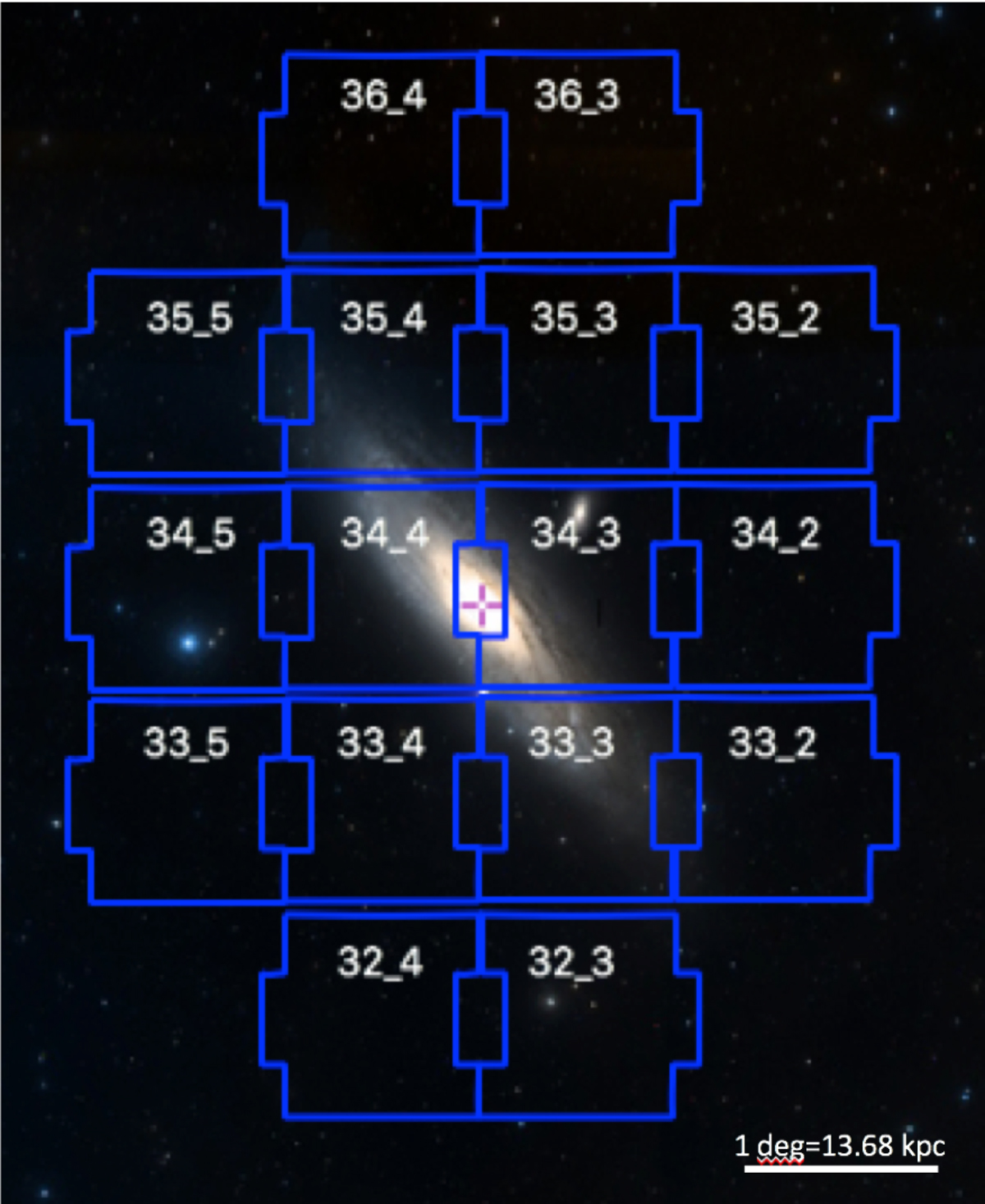