Context. Herschel observations have emphasized the role of molecular filaments in star formation. However, the origin and evolution of these filaments are not yet well understood, partly because of the lack of kinematic information.
Aims: We confirm from a kinematic viewpoint that the Taurus B211/B213 filament is accreting background cloud material, and we investigate the potential influence of large-scale external effects on the formation of the filament.
Methods: To examine whether the B211/B213 filament is accreting background gas because of its gravitational potential, we produced a toy accretion model and compared its predictions to the velocity patterns observed in 12CO (1-0) and 13CO (1-0). We also examined the spatial distributions of Hα, Planck 857 GHz dust continuum, and HI emission to search for evidence of large-scale external effects.
Results: We estimate that the depth of the Taurus cloud around the B211/B213 filament is ~0.3-0.7 pc under the assumption that the density of the gas is the same as the critical density of 13CO (1-0). Compared to a linear extent of >10 pc in the plane of the sky, this suggests that the 3D morphology of the cloud surrounding the B211/B213 filament is sheet-like. Position-velocity (PV) diagrams observed in 12CO (1-0) and 13CO (1-0) perpendicular to the filament axis show that the emission from the gas surrounding B211/B213 is redshifted to the northeast of the filament and blueshifted to the southwest, and that the velocities of both components approach the velocity of the B211/B213 filament as the line of sight approaches the crest of the filament. The PV diagrams predicted by our accretion model are in good agreement with the observed 12CO (1-0) and 13CO (1-0) PV diagrams, supporting the previously proposed scenario of mass accretion into the filament. Moreover, inspection of the spatial distribution of the Hα and Planck 857 GHz emission in the Taurus-California-Perseus region on scales up to >200 pc suggests that the B211/B213 filament may have formed as a result of an expanding supershell generated by the Per OB2 association.
Conclusions: Based on these results, we propose a scenario in which the B211/B213 filament was initially formed by large-scale compression of HI gas and is now growing in mass by gravitationally accreting molecular gas of the ambient cloud. 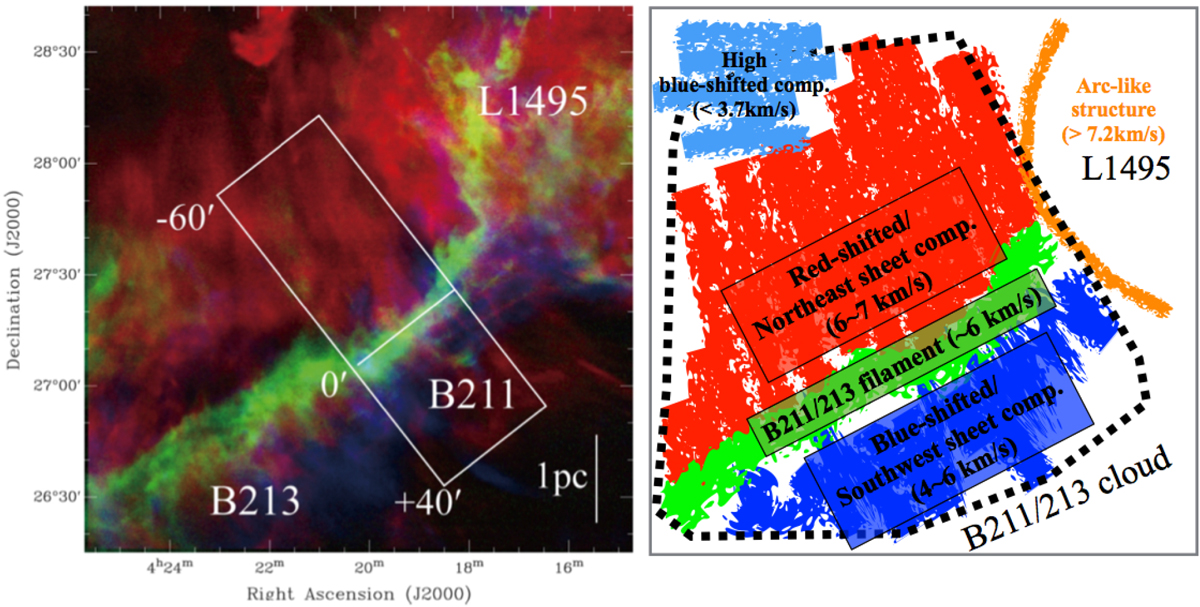