Context. In recent years, our understanding of giant planet formation progressed substantially. There have even been detections of a few young protoplanet candidates still embedded in the circumstellar disks of their host stars. The exact physics that describes the accretion of material from the circumstellar disk onto the suspected circumplanetary disk and eventually onto the young, forming planet is still an open question.
Aims: We seek to detect and quantify observables related to accretion processes occurring locally in circumstellar disks, which could be attributed to young forming planets. We focus on objects known to host protoplanet candidates and/or disk structures thought to be the result of interactions with planets.
Methods: We analyzed observations of six young stars (age 3.5-10 Myr) and their surrounding environments with the SPHERE/ZIMPOL instrument on the Very Large Telescope (VLT) in the Hα filter (656 nm) and a nearby continuum filter (644.9 nm). We applied several point spread function (PSF) subtraction techniques to reach the highest possible contrast near the primary star, specifically investigating regions where forming companions were claimed or have been suggested based on observed disk morphology.
Results: We redetect the known accreting M-star companion HD142527 B with the highest published signal to noise to date in both Hα and the continuum. We derive new astrometry (r=62.8-2.7+2.1 mas and PA=(98.7±1.8)°) and photometry (ΔN_Ha = 6.3-0.3+0.2 mag, ΔB_Ha = 6.7 ± 0.2 mag and ΔCnt_Ha = 7.3-0.2+0.3 mag) for the companion in agreement with previous studies, and estimate its mass accretion rate (Ṁ ≈ 1-2 × 10-10 M⊙yr-1). A faint point-like source around HD135344 B (SAO206462) is also investigated, but a second deeper observation is required to reveal its nature. No other companions are detected. In the framework of our assumptions we estimate detection limits at the locations of companion candidates around HD100546, HD169142, and MWC 758 and calculate that processes involving Hα fluxes larger than 8 × 10-14-10-15 erg s-1 cm-2 (Ṁ > 10-10-10-12 M⊙yr-1) can be excluded. Furthermore, flux upper limits of 10-14-10-15 erg s-1 cm-2 (Ṁ < 10-11-10-12 M⊙yr-1) are estimated within the gaps identified in the disks surrounding HD135344 B and TW Hya. The derived luminosity limits exclude Hα signatures at levels similar to those previously detected for the accreting planet candidate LkCa15 b. 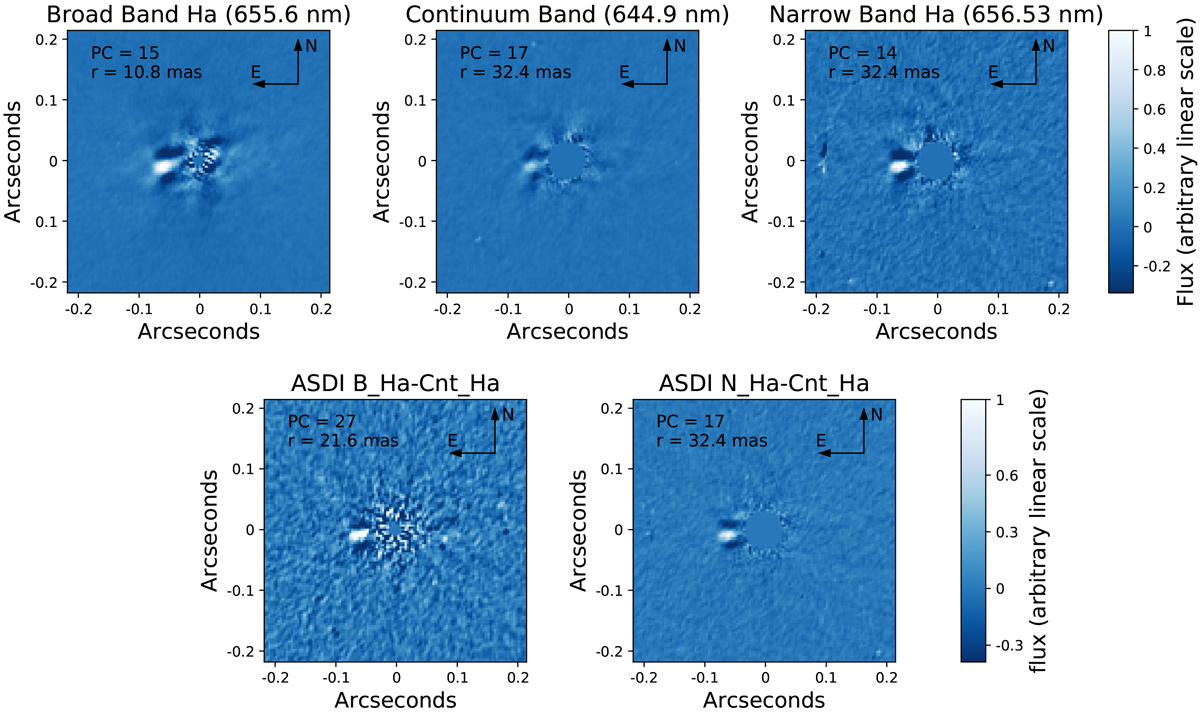