Spiral-shaped wavefronts in a sunspot umbra

Context. Solar active regions show a wide variety of oscillatory phenomena. The presence of the magnetic field leads to the appearance of several wave modes whose behavior is determined by the sunspot thermal and magnetic structure.
Aims: We aim to study the relation between the umbral and penumbral waves observed at the high photosphere and the magnetic field topology of the sunspot.
Methods: Observations of the sunspot in active region NOAA 12662 obtained with the GREGOR telescope (Observatorio del Teide, Tenerife, Spain) were acquired on 2017 June 17. The data set includes a temporal series in the Fe I 5435 Å line obtained with the imaging spectrograph GREGOR Fabry-Pérot Interferometer (GFPI) and a spectropolarimetric raster map acquired with the GREGOR Infrared Spectrograph (GRIS) in the 10 830 Å spectral region. The Doppler velocity deduced from the restored Fe I 5435 Å line has been determined, and the magnetic field vector of the sunspot has been inferred from spectropolarimetric inversions of the Ca I 10 839 Å and the Si I 10 827 Å lines.
Results: A two-armed spiral wavefront has been identified in the evolution of the two-dimensional velocity maps from the Fe I 5435 Å line. The wavefronts initially move counterclockwise in the interior of the umbra, and develop into radially outward propagating running penumbral waves when they reach the umbra-penumbra boundary. The horizontal propagation of the wavefronts approximately follows the direction of the magnetic field, which shows changes in the magnetic twist with height and horizontal position.
Conclusions: The spiral wavefronts are interpreted as the visual pattern of slow magnetoacoustic waves which propagate upward along magnetic field lines. Their apparent horizontal propagation is due to their sequential arrival to different horizontal positions at the formation height of the Fe I 5435 Å line, as given by the inclination and orientation of the magnetic field.

The movie associated to Fig. 2 is available at https://www.aanda.org 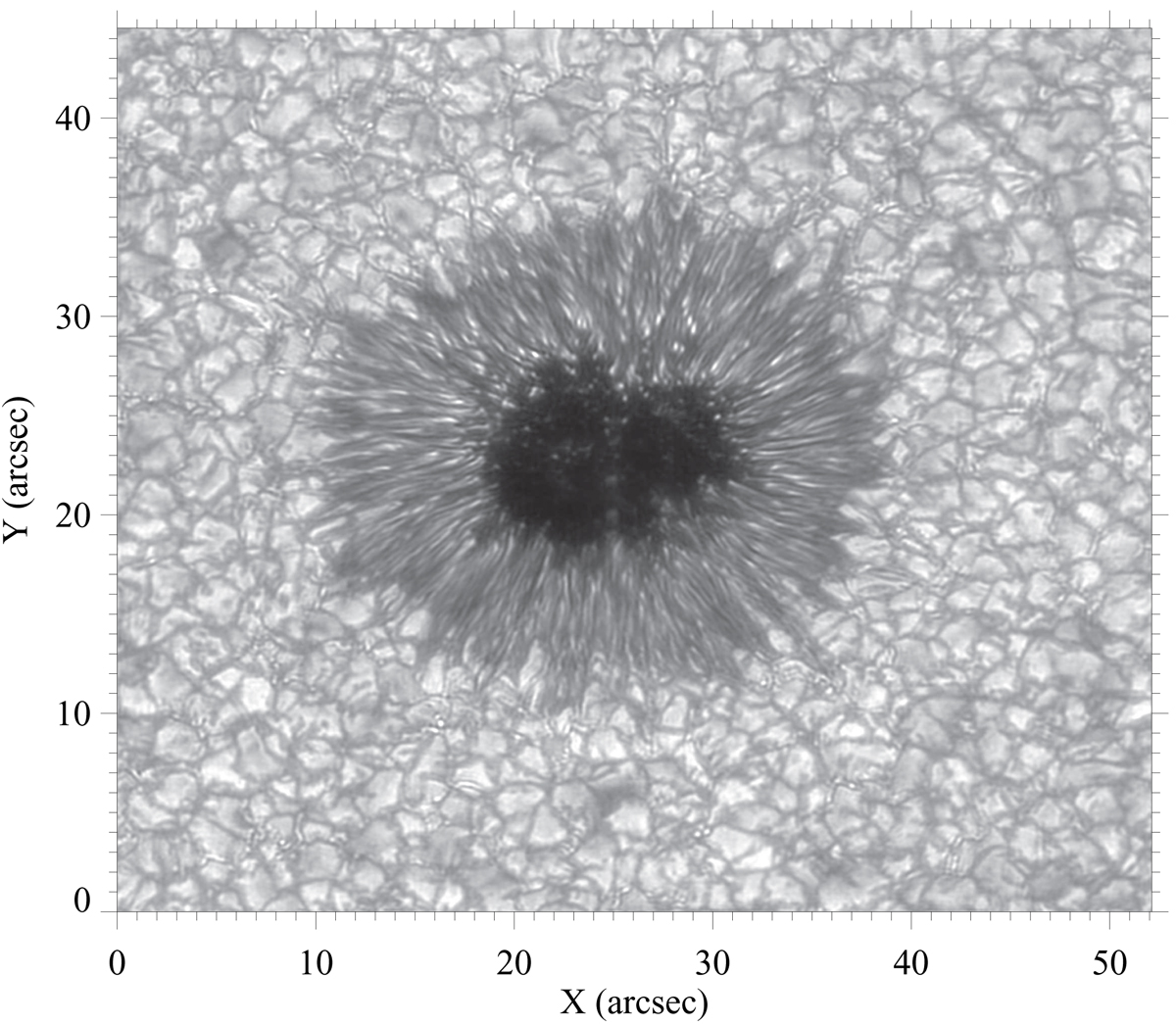