We have used the Submillimeter Array (SMA) at 860 μm to observe the brightest sources in the Submillimeter Common User Bolometer Array-2 (SCUBA-2) Cosmology Legacy Survey (S2CLS). The goal of this survey is to exploit the large field of the S2CLS along with the resolution and sensitivity of the SMA to construct a large sample of these rare sources and to study their statistical properties. We have targeted 70 of the brightest single-dish SCUBA-2 850 μm sources down to S850 ≈ 8 mJy, achieving an average synthesized beam of 2.4 arcsec and an average rms of σ860 = 1.5 mJy beam-1 in our primary beam-corrected maps. We searched our SMA maps for 4σ peaks, corresponding to S860 ≳ 6 mJy sources, and detected 62, galaxies, including three pairs. We include in our study 35 archival observations, bringing our sample size to 105 bright single-dish submillimetre sources with interferometric follow-up. We compute the cumulative and differential number counts, finding them to overlap with previous single-dish survey number counts within the uncertainties, although our cumulative number count is systematically lower than the parent S2CLS cumulative number count by 14 ± 6 per cent between 11 and 15 mJy. We estimate the probability that a ≳10 mJy single-dish submillimetre source resolves into two or more galaxies with similar flux densities to be less than 15 per cent. Assuming the remaining 85 per cent of the targets are ultraluminous starburst galaxies between z = 2 and 3, we find a likely volume density of ≳400 M⊙ yr-1 sources to be {∼ } 3^{+0.7}_{-0.6} {× } 10^{-7} Mpc-3. We show that the descendants of these galaxies could be ≳4 × 1011 M⊙ local quiescent galaxies, and that about 10 per cent of their total stellar mass would have formed during these short bursts of star formation. 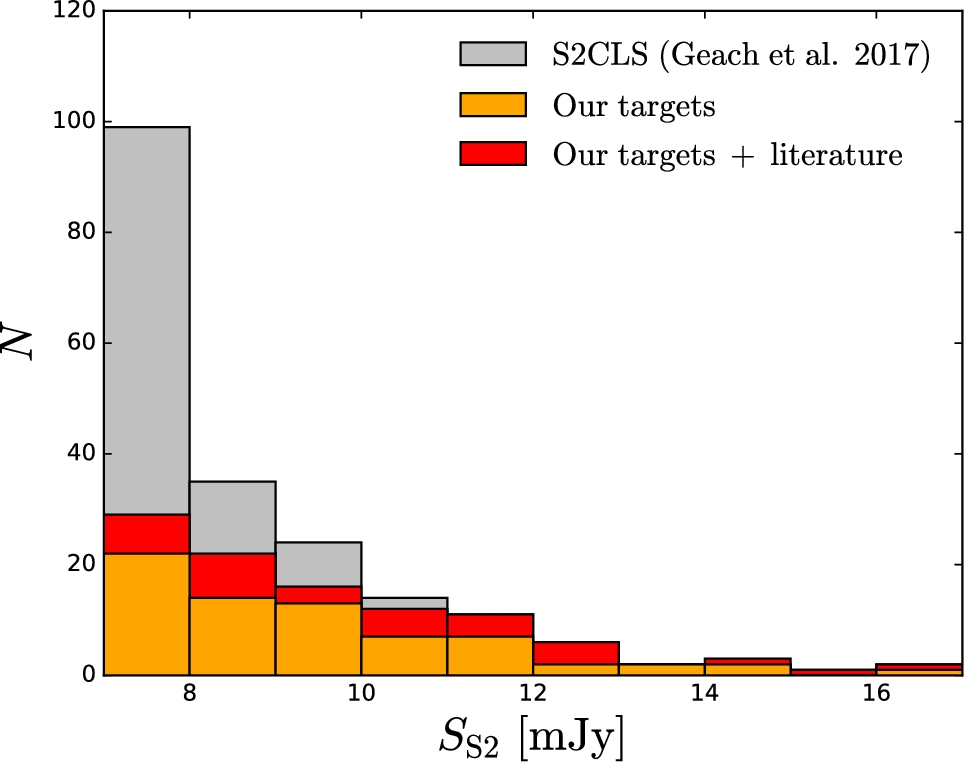