We present the first self-consistent prediction for the distribution of formation time-scales for close supermassive black hole (SMBH) pairs following galaxy mergers. Using ROMULUS25, the first large-scale cosmological simulation to accurately track the orbital evolution of SMBHs within their host galaxies down to sub-kpc scales, we predict an average formation rate density of close SMBH pairs of 0.013 cMpc-3 Gyr-1. We find that it is relatively rare for galaxy mergers to result in the formation of close SMBH pairs with sub-kpc separation and those that do form are often the result of Gyr of orbital evolution following the galaxy merger. The likelihood and time-scale to form a close SMBH pair depends strongly on the mass ratio of the merging galaxies, as well as the presence of dense stellar cores. Low stellar mass ratio mergers with galaxies that lack a dense stellar core are more likely to become tidally disrupted and deposit their SMBH at large radii without any stellar core to aid in their orbital decay, resulting in a population of long-lived `wandering' SMBHs. Conversely, SMBHs in galaxies that remain embedded within a stellar core form close pairs in much shorter time-scales on average. This time-scale is a crucial, though often ignored or very simplified, ingredient to models predicting SMBH mergers rates and the connection between SMBH and star formation activity. 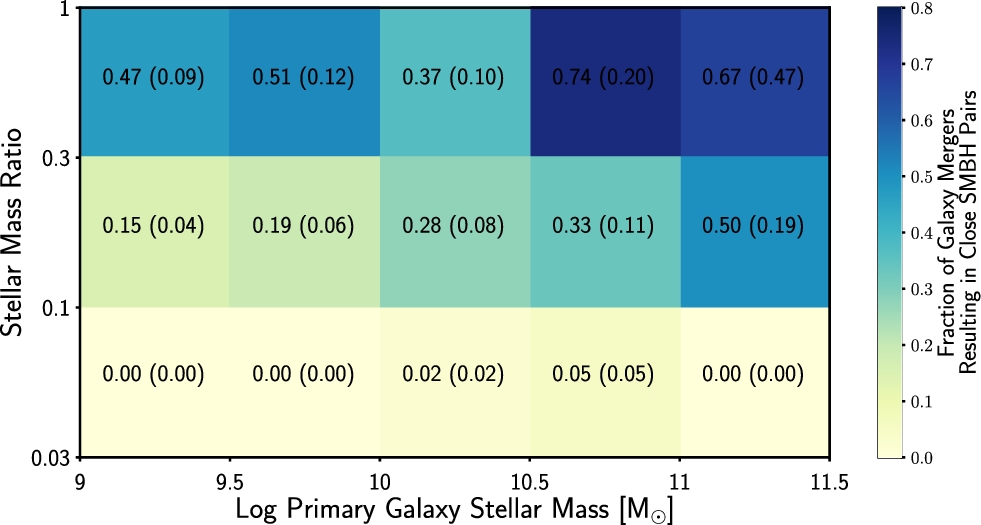