SDSS-IV MaNGA: constraints on the conditions for star formation in galaxy discs

Regions of disc galaxies with widespread star formation tend to be both gravitationally unstable and self-shielded against ionizing radiation, whereas extended outer discs with little or no star formation tend to be stable and unshielded on average. We explore what drives the transition between these two regimes, specifically whether discs first meet the conditions for self-shielding (parametrized by dust optical depth, τ) or gravitational instability (parametrized by a modified version of Toomre's instability parameters, Qthermal, which quantifies the stability of a gas disc that is thermally supported at T = 104 K). We first introduce a new metric formed by the product of these quantities, Qthermalτ, which indicates whether the conditions for disc instability or self-shielding are easier to meet in a given region of a galaxy, and we discuss how Qthermalτ can be constrained even in the absence of direct gas information. We then analyse a sample of 13 galaxies with resolved gas measurements and find that on average galaxies will reach the threshold for disc instabilities (Qthermal < 1) before reaching the threshold for self-shielding (τ > 1). Using integral field spectroscopic observations of a sample of 236 galaxies from the Mapping Nearby Galaxies at APO (MaNGA) survey, we find that the value of Qthermalτ in star-forming discs is consistent with similar behaviour. These results support a scenario where disc fragmentation and collapse occurs before self-shielding, suggesting that gravitational instabilities are the primary condition for widespread star formation in galaxy discs. Our results support similar conclusions based on recent galaxy simulations. 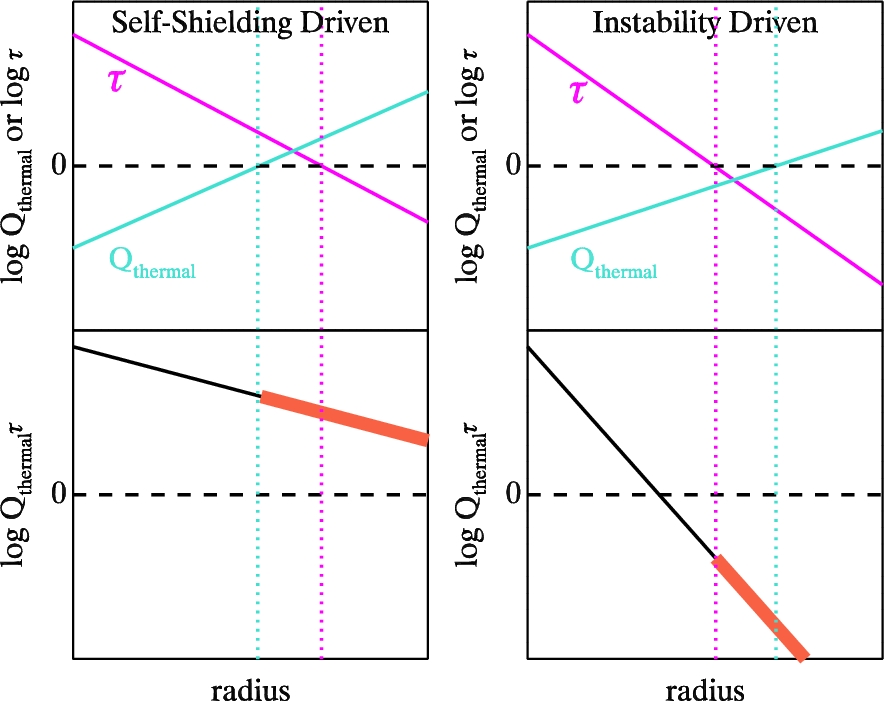