Observability of forming planets and their circumplanetary discs - I. Parameter study for ALMA

We present mock observations of forming planets with Atacama Large Millimeter Array (ALMA). The possible detections of circumplanetary discs (CPDs) were investigated around planets of Saturn, 1, 3, 5, and 10 Jupiter-masses that are placed at 5.2 au from their star. The radiative, 3D hydrodynamic simulations were then post-processed with RADMC3D and the ALMA observation simulator. We found that even though the CPDs are too small to be resolved, they are hot due to the accreting planet in the optically thick limit; therefore, the best chance to detect them with continuum observations in this case is at the shortest ALMA wavelengths, such as band 9 (440 μm). Similar fluxes were found in the case of Saturn and Jupiter-mass planets, as for the 10 MJup gas-giant, due to temperature-weighted optical depth effects: when no deep gap is carved, the planet region is blanketed by the optically thick circumstellar disc leading to a less efficient cooling there. A test was made for a 52 au orbital separation, which showed that optically thin CPDs are also detectable in band 7 but they need longer integration times (>5 h). Comparing the gap profiles of the same simulation at various ALMA bands and the hydro simulation confirmed that they change significantly, first because the gap is wider at longer wavelengths due to decreasing optical depth; secondly, the beam convolution makes the gap shallower and at least 25 per cent narrower. Therefore, caution has to be made when estimating planet masses based on ALMA continuum observations of gaps. 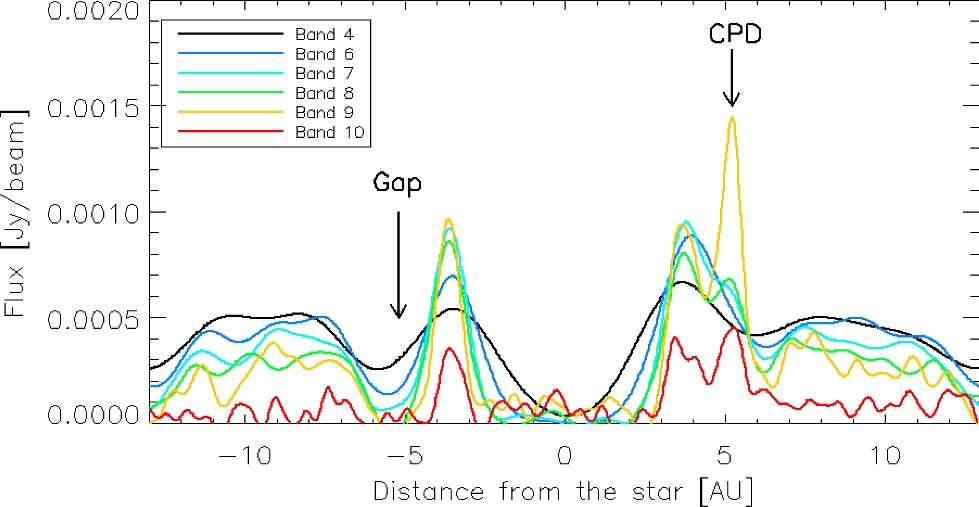