High-resolution SOFIA/EXES Spectroscopy of SO2 Gas in the Massive Young Stellar Object MonR2 IRS3: Implications for the Sulfur Budget

Sulfur has been observed to be severely depleted in dense clouds leading to uncertainty in the molecules that contain it and the chemistry behind their evolution. Here, we aim to shed light on the sulfur chemistry in young stellar objects (YSOs) by using high-resolution infrared spectroscopy of absorption by the ν 3 rovibrational band of SO2 obtained with the Echelon-Cross-Echelle Spectrograph on the Stratospheric Observatory for Infrared Astronomy. Using local thermodynamic equilibrium models we derive physical parameters for the SO2 gas in the massive YSO MonR2 IRS3. This yields a SO2/H abundance lower limit of 5.6 ± 0.5 × 10-7, or >4% of the cosmic sulfur budget, and an intrinsic line width (Doppler parameter) of b < 3.20 km s-1. The small line widths and high temperature (T ex = 234 ± 15 K) locate the gas in a relatively quiescent region near the YSO, presumably in the hot core where ices have evaporated. This sublimation unlocks a volatile sulfur reservoir (e.g., sulfur allotropes as detected abundantly in comet 67P/Churyumov-Gerasimenko), which is followed by SO2 formation by warm, dense gas-phase chemistry. The narrowness of the lines makes formation of SO2 from sulfur sputtered off grains in shocks less likely toward MonR2 IRS3. 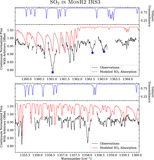