Current sheets are believed to form in the wakes of erupting flux ropes and to enable the magnetic reconnection responsible for an associated flare. Multiwavelength observations of an eruption on 2017 September 10 show a long, linear feature widely taken as evidence of a current sheet viewed edge-on. The relation between the high-temperature, high-density plasma thus observed and any current sheet is not yet entirely clear. We estimate the magnetic field strength surrounding the sheet and conclude that approximately one-third of all flux in the active region was opened by the eruption. Subsequently decreasing field strength suggests that the open flux closed down over the next several hours through reconnection at a rate \dot{{{Φ }}}≃ 5× {10}17 Mx s-1. We find in AIA observations evidence of downward-moving, dark structures analogous to either supra-arcade downflows, more typically observed above flare arcades viewed face-on, or supra-arcade downflowing loops, previously reported in flares viewed in this perspective. These features suggest that the plasma sheet is composed of the magnetic flux retracting after being reconnected high above the arcade. We model flux tube retraction following reconnection to show that this process can generate high densities and temperatures as observed in the plasma sheet. The retracting flux tubes reach their highest temperatures at the end of their retraction, well below the site of reconnection, consistent with previous analysis of AIA and EIS data showing a peak in the plasma temperature near the base of this particular sheet. 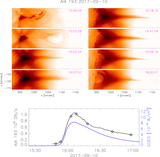