In cases where both components of a binary system show oscillations, asteroseismology has been proposed as a method to identify the system. For KIC 2568888, observed with Kepler, we detect oscillation modes for two red giants in a single power-density spectrum. Through an asteroseismic study we investigate if the stars have similar properties, which could be an indication that they are physically bound into a binary system. While one star lies on the red giant branch (RGB), the other, more evolved star, is either a RGB or asymptotic giant branch star. We found similar ages for the red giants and a mass ratio close to 1. Based on these asteroseismic results, we propose KIC 2568888 as a rare candidate binary system (∼0.1% chance). However, when combining the asteroseismic data with ground-based BVI photometry we estimated different distances for the stars, which we cross-checked with Gaia DR2. From Gaia we obtained for one object a distance between and broadly consistent with the distances from BVI photometry. For the other object we have a negative parallax with a not yet reliable Gaia distance solution. The derived distances challenge a binary interpretation and may either point to a triple system, which could explain the visible magnitudes, or, to a rare chance alignment (∼0.05% chance based on stellar magnitudes). This probability would even be smaller, if calculated for close pairs of stars with a mass ratio close to unity in addition to similar magnitudes, which may indeed indicate that a binary scenario is more favorable. 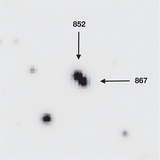