We present Hubble Space Telescope/Advanced Camera for Surveys (ACS) imaging of 23 very low surface brightness (μ e,V ∼ 25-27.5) galaxies detected in the fields of four nearby galaxy groups. These objects were selected from deep optical imaging obtained with the Dragonfly Telephoto Array. Seven are newly identified, while most of the others had been seen previously in visual surveys of deep photographic plates and more recent surveys. Few have previously been studied in detail. From the ACS images, we measure distances to the galaxies using both the tip of the red giant branch method and the surface brightness fluctuations method. We demonstrate that the two methods are consistent with each other in the regime where both can be applied. The distances to 15 out of 20 galaxies with stable measurements are consistent with that of the targeted group within errors. This suggests that assuming group membership based solely on projected proximity is ∼75% successful in this regime. The galaxies are nearly round, with a median axis ratio of 0.85, and visually resemble dwarf spheroidal galaxies. The objects have a range of sizes, from R e = 0.4 kpc to R e = 1.8 kpc, with a median < {R}e> =1.0 {kpc}. They range in luminosity from M V = -11.4 to M V = -15.6, with a median < {M}V> =-12.4. Galaxies with R e ∼ 1 kpc and M V ∼ -12 are fairly rare in the Local Group, but we find many of them in this relatively small sample. Four of the objects fall in the class of ultra-diffuse galaxies, with R e > 1.5 kpc and μ 0,V > 24 mag arcsec-2, including the recently identified dark matter deficient galaxy NGC 1052-DF2. 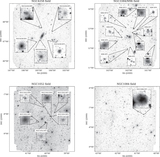