An Ultra Metal-poor Star Near the Hydrogen-burning Limit

It is unknown whether or not low-mass stars can form at low metallicity. While theoretical simulations of Population III (Pop III) star formation show that protostellar disks can fragment, it is impossible for those simulations to discern if those fragments survive as low-mass stars. We report the discovery of a low-mass star on a circular orbit with orbital period P = 34.757 ± 0.010 days in the ultra metal-poor (UMP) single-lined spectroscopic binary system 2MASS J18082002-5104378. The secondary star 2MASS J18082002-5104378 B has a mass {M}2={0.14}-0.01+0.06 {M}⊙ , placing it near the hydrogen-burning limit for its composition. The 2MASS J18082002-5104378 system is on a thin disk orbit as well, making it the most metal-poor thin disk star system by a considerable margin. The discovery of 2MASS J18082002-5104378 B confirms the existence of low-mass UMP stars and its short orbital period shows that fragmentation in metal-poor protostellar disks can lead to the formation and survival of low-mass stars. We use scaling relations for the typical fragment mass and migration time along with published models of protostellar disks around both UMP and primordial composition stars to explore the formation of low-mass Pop III stars via disk fragmentation. We find evidence that the survival of low-mass secondaries around solar-mass UMP primaries implies the survival of solar-mass secondaries around Pop III primaries with masses 10 {M}⊙ ≲ {M}* ≲ 100 {M}⊙ . If true, this inference suggests that solar-mass Pop III stars formed via disk fragmentation could survive to the present day. 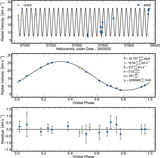