We investigate the onset of a GOES M3.7 flare on 2017 September 9 with rapid-cadence (9.4 s) UV stare spectra obtained with IRIS in five 1″ slit segments. Our analysis is based primarily on integrated intensities and Doppler velocities of C II λ1334.5 (T ≈ 2.5 × 104 K), Si IV λ1402.7 (7.9 × 104 K), and Fe XXI λ1354.1 (1.1 × 107 K). The four segments within the ribbon show systematically earlier starting times for the low-T lines (C II and Si IV) than Fe XXI; further, the velocities derived for Fe XXI are generally directed upward along the line of sight. This is consistent with the standard flare model, in which beams of nonthermal particles ionize and heat the chromosphere and drive chromospheric evaporation: as the temperature and ionization stages of the chromospheric plasma increase, intensities of emission lines also increase, first from lines in lower stages of ionization, and later from lines in higher stages of ionization. Where quasi-periodic fluctuations were observed in the ribbon in both low-T and Fe XXI emission, peaks in the low-T intensity preceded those in the Fe XXI intensity, and peaks in the Fe XXI upward velocity typically also preceded those in the Fe XXI intensity. Thus, the behavior of each individual fluctuation was similar to that of a standard flare, suggesting that each individual fluctuation was due to a separate injection of nonthermal particles into the chromosphere. Based on RHESSI hard X-ray observations, we estimate sufficient beam energy flux (≥1.5 × 1010 erg cm-2 s-1) to drive explosive chromospheric evaporation. 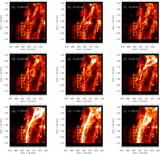