YZiCS: Preprocessing of Dark Halos in the Hydrodynamic Zoom-in Simulation of Clusters

To understand the galaxy population in clusters today, we should also consider the impact of previous environments prior to cluster infall, namely preprocessing. We use the Yonsei Zoom-in Cluster Simulation, a hydrodynamic high-resolution zoom-in simulation of 15 clusters, and focus on the tidal stripping suffered by the dark matter halos of cluster members due to preprocessing. We find that ∼48% of today’s cluster members were once satellites of other hosts. This is slightly higher than previous estimates, in part because we consider not just group-mass hosts but hosts of all masses. Thus, we find that the preprocessed fraction is poorly correlated with cluster mass and is instead related to each cluster’s recent mass growth rate. Hosts less massive than groups are significant contributors, providing more than one-third of the total preprocessed fraction. We find that halo mass loss is a clear function of the time spent in hosts. However, two factors can increase the mass-loss rate considerably: the mass ratio of a satellite to its host and the cosmological epoch when the satellite was hosted. The latter means we may have previously underestimated the role of high-redshift groups. From a sample of heavily tidally stripped members in clusters today, nearly three-quarters were previously in a host. Thus, visibly disturbed cluster members are more likely to have experienced preprocessing. Being hosted before cluster infall enables cluster members to experience tidal stripping for extended durations compared to direct cluster infall and at earlier epochs when hosts were more destructive. 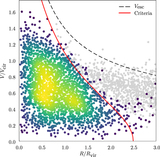