The Distance of the Dark Matter Deficient Galaxy NGC 1052-DF2

We recently inferred that the galaxy NGC 1052-DF2 has little or no dark matter and a rich system of unusual globular clusters. We assumed that the galaxy is a satellite of the luminous elliptical galaxy NGC 1052 at ≈20 Mpc, on the basis of its surface brightness fluctuations (SBFs) distance of 19.0 ± 1.7 Mpc, its radial velocity of ≈1800 km s-1, and its projected position. Here we analyze the color-magnitude diagram (CMD) of NGC 1052-DF2, following the suggestion by Trujillo et al. that the tip of the red giant branch (TRGB) can be detected in currently available Hubble Space Telescope (HST) data and the galaxy is at ̃13 Mpc. Using fully populated galaxy models we show that the CMD is strongly influenced by blends. These blends produce a “phantom” TRGB ̃2 times brighter than the true TRGB, which can lead to erroneous distance estimates ̃1.4 times smaller than the actual distance. We compare NGC 1052-DF2 to model images as well as other galaxies in our HST sample, and show that the large population of unblended RGB stars expected for distances of ̃13 Mpc is not detected. We also provide a new distance measurement to NGC 1052-DF2 that is free of calibration uncertainties, by anchoring it to a satellite of the megamaser host galaxy NGC 4258. From a megamaser-TRGB-SBF distance ladder we obtain D = 18.7 ± 1.7 Mpc, consistent with our previous measurement and with the distance to the elliptical galaxy NGC 1052.

Publication:
The Astrophysical Journal
Pub Date:
September 2018
DOI:
10.3847/2041-8213/aada4d
arXiv:
arXiv:1807.06025
Bibcode:
2018ApJ...864L..18V
Keywords:
E-Print:
Accepted for publication in ApJ Letters. The key point of the paper is made in Figure 2. All data and models are available upon request. Minor changes compared to V1 make the paper more of a stand-alone analysis and less of a response to Trujillo et al. (2018). Also see the independent analysis of Blakeslee &amp 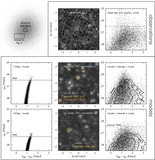