The second data release from the Gaia mission (Gaia DR2) includes, among its billion entries, astrometric parameters for binary companions to a number of known pulsars, including white dwarf companions to millisecond pulsars (MSPs) and the non-degenerate components of so-called “black widow” and “redback” systems. We find 22 such counterparts in DR2, of which 12 have statistically significant measurements of parallax. These DR2 optical proper motions and parallaxes provide new measurements of the distances and transverse velocities of the associated pulsars. For the most part, the results agree with existing radio interferometric and pulsar timing-based astrometry, as well as other distance estimates based on photometry or associations, and for some pulsars they provide the best known distance and velocity estimates. In particular, two of these pulsars have no previous distance measurement: PSR J1227-4853, for which Gaia measures a parallax of 0.62 ± 0.16 mas, and PSR J1431-4715, with a Gaia parallax of 0.64 ± 0.16 mas. Using the Gaia distance measurements, we find that dispersion-measure-based distance estimates calculated using the Cordes & Lazio and Yao et al. Galactic electron density models are on average slightly underestimated, which may be a selection effect due to the over-representation of pulsars at high Galactic latitudes in the present Gaia sample. While the Gaia DR2 results do not quite match the precision that can be achieved by dedicated pulsar timing or radio interferometry, taken together they constitute a small but important improvement to the pulsar distance scale, and the subset of MSPs with distances measured by Gaia may help improve the sensitivity of pulsar timing arrays to nanohertz gravitational waves. 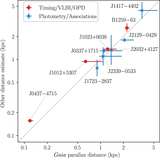