A number of ultracompact H II regions in Galactic star-forming environments have been observed to vary significantly in radio flux density on timescales of 10-20 years. Theory predicted that such variations should occur when the accretion flow that feeds a young massive star becomes unstable and clumpy. We have targeted the massive star-forming region W49A with the Karl G. Jansky Very Large Array for observations at 3.6 cm with the B-configuration at ∼0.″8 resolution, to compare to nearly identical observations taken almost 21 years earlier (2015 February and 1994 August). Most of the sources in the crowded field of ultracompact and hypercompact H II regions exhibit no significant changes over this time period. However, one source, W49A/G2, decreased by 20% in peak intensity (from 71 ± 4 mJy/beam to 57 ± 3 mJy/beam), and 40% in integrated flux (from 0.109 ± 0.011 Jy to 0.067 ± 0.007 Jy), where we cite 5σ errors in peak intensity, and 10% errors in integrated flux. We present the radio images of the W49A region at the two epochs, the difference image that indicates the location of the flux density decrease, and discuss explanations for the flux density decrease near the position of W49A/G2. 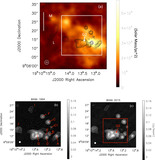