The Orbit of the Close Companion of Polaris: Hubble Space Telescope Imaging, 2007 to 2014

As part of a program to determine the dynamical masses of Cepheids, we have imaged the nearest and brightest Cepheid, Polaris, with the Hubble Space Telescope (HST) Wide Field Planetary Camera 2 and Wide Field Camera 3. Observations were obtained at three epochs between 2007 and 2014. In these images, as in HST frames obtained in 2005 and 2006, which we discussed in a 2008 paper, we resolve the close companion Polaris Ab from the Cepheid Polaris Aa. Because of the small separation and large magnitude difference between Polaris Aa and Ab, we used point-spread function deconvolution techniques to carry out astrometry of the binary. Based on these new measurements, we have updated the elements for the 29.59 year orbit. Adopting the distance to the system from the recent Gaia Data Release 2, we find a dynamical mass of 3.45 ± 0.75 M ⊙ for the Cepheid, although this is preliminary and will be improved by CHARA measurements covering periastron. As is the case for the recently determined dynamical mass for the Cepheid V1334 Cyg, the mass of Polaris is significantly lower than the “evolutionary mass” predicted by fitting to evolutionary tracks in the Hertzsprung-Russell diagram. We discuss several questions and implications raised by these measurements, including the pulsation mode, which instability-strip crossing the stars are in, and possible complications such as rotation, mass loss, and binary mergers. The distant third star in the system, Polaris B, appears to be older than the Cepheid, based on isochrone fitting. This may indicate that the Cepheid Polaris is relatively old and is the result of a binary merger, rather than being a young single star.

Based on observations made with the NASA/ESA Hubble Space Telescope, obtained by the Space Telescope Science Institute. STScI is operated by the Association of Universities for Research in Astronomy, Inc., under NASA contract NAS5-26555. 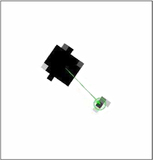