We use deep, multi-epoch near-IR images of the VISTA Variables in the Vía Láctea (VVV) Survey to measure proper motions (PMs) of stars in the Milky Way globular cluster (GC) FSR1716 = VVV-GC05. The color-magnitude diagram of this object, made by using PM-selected members, shows an extended horizontal branch, nine confirmed RR Lyrae (RRL) members in the instability strip, and possibly several hotter stars extending to the blue. Based on the fundamental-mode (ab-type) RRL stars that move coherently with the cluster, we confirmed that FSR1716 is an Oosterhoff I GC with a mean period < {P}{ab}> = 0.574 days. Intriguingly, we detect tidal extensions to both sides of this cluster in the spatial distribution of PM-selected member stars. Also, one of the confirmed RRabs is located ∼11 arcmin in projection from the cluster center, suggesting that FSR1716 may be losing stars due to the gravitational interaction with the Galaxy. We also measure radial velocities (RVs) for five cluster red giants selected using the PMs. The combination of RVs and PMs allow us to compute for the first time the orbit of this GC, using an updated Galactic potential. The orbit results to be confined within | {Z}\max | < 2.0 kpc, and has eccentricity 0.4 < e < 0.6, with perigalactic distance 1.5< {R}peri}({kpc})< 2.3, and apogalactic distance 5.3< {R}apo}({kpc})< 6.4. We conclude that, in agreement with its relatively low metallicity ([Fe/H] = -1.4 dex), this is an inner-halo GC plunging into the disk of the Galaxy. As such, this is a unique object with which to test the dynamical processes that contribute to the disruption of Galactic GCs. 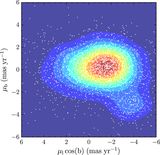