The Kinematics of Extended Lyα Emission in a Low-mass, Low-metallicity Galaxy at z = 2.3

{Ly}α photons are resonantly scattered by neutral hydrogen, and may therefore trace both the spatial extent and the kinematics of the gas surrounding galaxies. We present new observations of the extended {Ly}α halo of Q2343-BX418, a low-mass ({M}\star =5× {10}8 {M}⊙ ), low-metallicity (Z ≈ 0.25 Z ⊙) star-forming galaxy at z = 2.3. Using the Keck Cosmic Web Imager (KCWI), the blue-sensitive optical integral field spectrograph recently installed on the Keck II telescope, we detect {Ly}α in emission to a radius of 23 kpc, and measure an exponential scale length of 6 kpc in the outer region of the extended halo. We study the double-peaked spectroscopic {Ly}α profile in individual spectral pixels (“spaxels”) over a ∼25 × 30 kpc region, finding significant variations in the peak ratio and peak separation. The profile is dominated by the red peak in the central regions, while in the outskirts of the extended halo the red and blue peak strengths are roughly equal; these observations are consistent with a model in which the peak ratio is largely determined by the radial component of the outflow velocity. We find a gradient of 300 {km} {{{s}}}-1 in the {Ly}α peak separation across the extended halo, indicating variations in the column density, covering fraction, or velocity range of the gas. These new observations emphasize the need for realistic, spatially resolved models of {Ly}α radiative transfer in the halos of galaxies.

The data presented herein were obtained at the W. M. Keck Observatory, which is operated as a scientific partnership among the California Institute of Technology, the University of California, and the National Aeronautics and Space Administration. The Observatory was made possible by the generous financial support of the W. M. Keck Foundation. 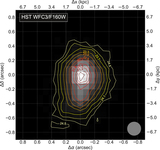