First Detection of the Simplest Organic Acid in a Protoplanetary Disk

The formation of asteroids, comets, and planets occurs in the interior of protoplanetary disks during the early phase of star formation. Consequently, the chemical composition of the disk might shape the properties of the emerging planetary system. In this context, it is crucial to understand whether and what organic molecules are synthesized in the disk. In this Letter, we report the first detection of formic acid (HCOOH) toward the TW Hydrae protoplanetary disk. The observations of the trans-HCOOH 6(1,6)-5(1,5) transition were carried out at 129 GHz with Atacama Large Millimeter/Submillimeter Array (ALMA). We measured a disk-averaged gas-phase t-HCOOH column density of ∼(2-4) × 1012 cm-2, namely as large as that of methanol. HCOOH is the first organic molecule containing two oxygen atoms detected in a protoplanetary disk, a proof that organic chemistry is very active, albeit difficult to observe, in these objects. Specifically, this simplest acid stands as the basis for synthesis of more complex carboxylic acids used by life on Earth.

This Letter makes use of the following ALMA data: ADS/JAO.ALMA#2015.1.00845.S (PI C. Favre). ALMA is a partnership of ESO (representing its member states), NSF (USA) and NINS (Japan), together with NRC (Canada), NSC and ASIAA (Taiwan), and KASI (Republic of Korea), in cooperation with the Republic of Chile. The Joint ALMA Observatory is operated by ESO, AUI/NRAO and NAOJ. 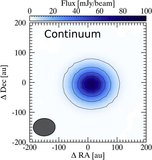