Formation and Destruction of SiS in Space

The presence of SiS in space seems to be restricted to a few selected types of astronomical environments. It is long known to be present in circumstellar envelopes around evolved stars and it has also been detected in a handful of star-forming regions with evidence of outflows, like Sgr B2, Orion KL, and more recently, L1157-B1. The kinetics of reactions involving SiS is very poorly known and here we revisit the chemistry of SiS in space by studying some potentially important reactions of the formation and destruction of this molecule. We calculated ab initio potential energy surfaces of the SiOS system and computed rate coefficients in the temperature range of 50-2500 K for the reaction of the destruction of SiS in collisions with atomic O, and of its formation, through the reaction between Si and SO. We find that both of the reactions are rapid, with rate coefficients of a few times 10-10 cm3 s-1, almost independent of temperature. In the reaction between Si and SO, SiO production is 5-7 times more efficient than SiS formation. The reaction of SiS with O atoms can play an important role in destroying SiS in envelopes around evolved stars. We built a simple chemical model of a postshock gas to study the chemistry of SiS in protostellar outflows and we found that SiS forms with a lower abundance and later than SiO, that SiS is efficiently destroyed through reaction with O, and that the main SiS-forming reactions are Si + SO and Si + SO2. 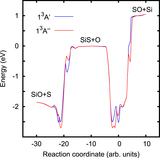