Some authors have proposed that electron energy distributions in H II regions and planetary nebulae may be significantly nonthermal, and κ-distributions have been suggested as being appropriate. Here it is demonstrated that the electron energy distribution function is extremely close to a Maxwellian up to electron kinetic energies of ∼ 13 {eV} in H II regions, and up to ∼ 16 {eV} in planetary nebulae: κ-distributions are inappropriate. The small departures from a Maxwellian have negligible effects on line ratios. When observed line ratios in H II regions deviate from models with a single electron temperature, it must arise from spatial variations in electron temperature, rather than local deviations from a Maxwellian. 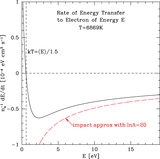