In the present work, we analyze a filament eruption associated with an interplanetary coronal mass ejection that arrived at L1 on 2011 August 5. In multiwavelength Solar Dynamic Observatory/Advanced Imaging Assembly (AIA) images, three plasma parcels within the filament were tracked at high cadence along the solar corona. A novel absorption diagnostic technique was applied to the filament material traveling along the three chosen trajectories to compute the column density and temperature evolution in time. Kinematics of the filamentary material were estimated using STEREO/Extreme Ultraviolet Imager and STEREO/COR1 observations. The Michigan Ionization Code used inputs of these density, temperature, and speed profiles for the computation of ionization profiles of the filament plasma. Based on these measurements, we conclude that the core plasma was in near ionization equilibrium, and the ionization states were still evolving at the altitudes where they were visible in absorption in AIA images. Additionally, we report that the filament plasma was heterogeneous, and the filamentary material was continuously heated as it expanded in the low solar corona. 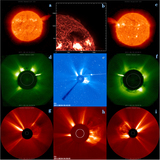