We report results from very long baseline interferometric (VLBI) observations of the supermassive black hole in the Galactic center, Sgr A*, at 1.3 mm (230 GHz). The observations were performed in 2013 March using six VLBI stations in Hawaii, California, Arizona, and Chile. Compared to earlier observations, the addition of the APEX telescope in Chile almost doubles the longest baseline length in the array, provides additional uv coverage in the N-S direction, and leads to a spatial resolution of ∼30 μas (∼3 Schwarzschild radii) for Sgr A*. The source is detected even at the longest baselines with visibility amplitudes of ∼4%-13% of the total flux density. We argue that such flux densities cannot result from interstellar refractive scattering alone, but indicate the presence of compact intrinsic source structure on scales of ∼3 Schwarzschild radii. The measured nonzero closure phases rule out point-symmetric emission. We discuss our results in the context of simple geometric models that capture the basic characteristics and brightness distributions of disk- and jet-dominated models and show that both can reproduce the observed data. Common to these models are the brightness asymmetry, the orientation, and characteristic sizes, which are comparable to the expected size of the black hole shadow. Future 1.3 mm VLBI observations with an expanded array and better sensitivity will allow more detailed imaging of the horizon-scale structure and bear the potential for a deep insight into the physical processes at the black hole boundary. 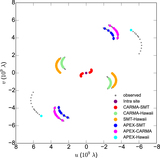