We present a detailed analysis of the radial distribution of light-element multiple populations (LE-MPs) in the massive and dense globular cluster M80, based on a combination of UV and optical Hubble Space Telescope data. Surprisingly, we find that first-generation (FG) stars (FG) are significantly more centrally concentrated than extreme second-generation (SG) stars out to ∼2.5r h from the cluster center. To understand the origin of such peculiar behavior, we used a set of N-body simulations following the long-term dynamical evolution of LE-MPs. We find that, given the advanced dynamical state of the cluster, the observed difference does not depend on the primordial relative distributions of FG and SG stars. On the contrary, a difference of ∼0.05-0.10 M ⊙ between the average masses of the two subpopulations is needed to account for the observed radial distributions. We argue that such a mass difference might be the result of the higher He abundance of SG stars (of the order of ΔY ∼ 0.05-0.06) with respect to FG stars. Interestingly, we find that a similar He variation is necessary to reproduce the horizontal branch morphology of M80. These results demonstrate that differences in mass among LE-MPs, due to different He content, should be properly taken into account for a correct interpretation of their radial distribution, at least in dynamically evolved systems. 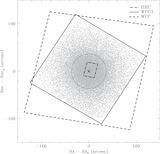