Demographics of Star-forming Galaxies since z ∼ 2.5. I. The UVJ Diagram in CANDELS

This is the first in a series of papers examining the demographics of star-forming (SF) galaxies at 0.2 < z < 2.5 in CANDELS. We study 9100 galaxies from GOODS-S and UDS, having published values of redshifts, masses, star formation rates (SFRs), and dust attenuation (A V ) derived from UV-optical spectral energy distribution fitting. In agreement with previous works, we find that the UVJ colors of a galaxy are closely correlated with its specific star formation rate (SSFR) and A V . We define rotated UVJ coordinate axes, termed S SED and C SED, that are parallel and perpendicular to the SF sequence and derive a quantitative calibration that predicts SSFR from C SED with an accuracy of ∼0.2 dex. SFRs from UV-optical fitting and from UV+IR values based on Spitzer/MIPS 24 μm agree well overall, but systematic differences of order 0.2 dex exist at high and low redshifts. A novel plotting scheme conveys the evolution of multiple galaxy properties simultaneously, and dust growth, as well as star formation decline and quenching, exhibit “mass-accelerated evolution” (“downsizing”). A population of transition galaxies below the SF main sequence is identified. These objects are located between SF and quiescent galaxies in UVJ space, and have lower A V and smaller radii than galaxies on the main sequence. Their properties are consistent with their being in transit between the two regions. The relative numbers of quenched, transition, and SF galaxies are given as a function of mass and redshift. 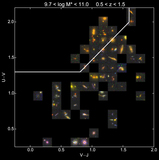