Chromospheric Response during the Precursor and the Main Phase of a B6.4 Flare on 2005 August 20

Solar flare precursors depict a constrained rate of energy release, in contrast to the imminent rapid energy release, which calls for a different regime of plasma processes to be at play. Due to the subtle emission during the precursor phase, its diagnostics remain delusive, revealing either nonthermal electrons (NTEs) or thermal conduction to be the driver. In this regard, we investigate the chromospheric response during various phases of a B6.4 flare on 2005 August 20. Spatiotemporal investigation of flare ribbon enhancement during the precursor phase, carried out using spectra images recorded in several wavelength positions on the Hα line profile, revealed its delayed response (180 s) compared to the X-ray emission, as well as a sequential increment in the width of the line profile, which are indicative of a slow heating process. However, the energy contained in the Hα emission during the precursor phase can reach as high as 80% of that estimated during the main phase. Additionally, the plasma hydrodynamics during the precursor phase, resulting from the application of a single-loop one-dimensional model, revealed the presence of a power-law extension in the model-generated X-ray spectra, with a flux lower than the RHESSI background. Therefore, our multiwavelength diagnostics and hydrodynamical modeling of the precursor emission indicates the role of a two-stage process. First, reconnection-triggered NTEs, although too small in flux to overcome the observational constraints, thermalize in the upper chromosphere. This leads to the generation of a slow conduction front, which causes plasma heating during the precursor phase. 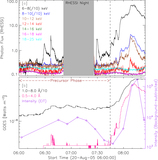