Comet C/2011 W3 (Lovejoy) between 2 and 10 Solar Radii: Physical Parameters of the Comet and the Corona

Comet C/2011 W3 (Lovejoy) is the first sungrazing comet in many years to survive perihelion passage. We report ultraviolet observations with the Ultraviolet Coronagraph Spectrometer (UVCS) spectrometer aboard the Solar and Heliospheric Observatory satellite at five heights as the comet approached the Sun. The brightest line, Lyα, shows dramatic variations in intensity, velocity centroid, and width during the observation at each height. We derive the outgassing rates and the abundances of N, O, and Si relative to H, and we estimate the effective diameter of the nucleus to be several hundred meters. We consider the effects of the large outgassing rate on the interaction between the cometary gas and the solar corona and find good qualitative agreement with the picture of a bow shock resulting from mass loading by cometary neutrals. We obtain estimates of the solar wind density, temperature, and speed, and compare them with predictions of a global magnetohydrodynamic simulation, finding qualitative agreement within our uncertainties. We also determine the sublimation rate of silicate dust in the comet’s tail by comparing the visible brightness from the Large Angle Spectroscopic Coronagraphs with the Si III intensity from UVCS. The sublimation rates lie between the predicted rates for olivines and pyroxenes, suggesting that the grains are composed of a mixture of those minerals. 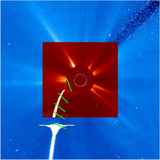