Using the observations recorded by the Atmospheric Imaging Assembly (AIA) on board the Solar Dynamics Observatory and the Interface Region Imaging Spectrograph (IRIS) and the Extreme-ultraviolet Imaging Spectrometer and X-Ray Telescope both on board Hinode, we present evidence of chromospheric evaporation in a coronal loop after the occurrence of two active region transient brightenings (ARTBs) at the two footpoints. The chromospheric evaporation started nearly simultaneously in all of the three hot channels of AIA 131, 94, and 335 Å and was observed to be temperature dependent, being fastest in the highest temperature channel. The whole loop became fully brightened following the ARTBs after ≈25 s in 131 Å, ≈40 s in 94 Å, and ≈6.5 minutes in 335 Å. The differential emission measurements at the two footpoints (i.e., of two ARTBs) and at the loop top suggest that the plasma attained a maximum temperature of ̃10 MK at all these locations. The spectroscopic observations from IRIS revealed the presence of redshifted emission of ̃20 km s-1 in cooler lines like C II and Si IV during the ARTBs that was cotemporal with the evaporation flow at the footpoint of the loop. During the ARTBs, the line width of C II and Si IV increased nearly by a factor of two during the peak emission. Moreover, enhancement in the line width preceded that in the Doppler shift, which again preceded enhancement in the intensity. The observed results were qualitatively reproduced by 1D hydrodynamic simulations, where energy was deposited at both of the footpoints of a monolithic coronal loop that mimicked the ARTBs identified in the observations. 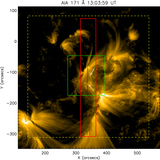