Since its discovery in 2008, the Andromeda galaxy nova M31N 2008-12a has been observed in eruption every single year. This unprecedented frequency indicates an extreme object, with a massive white dwarf and a high accretion rate, which is the most promising candidate for the single-degenerate progenitor of a Type Ia supernova known to date. The previous three eruptions of M31N 2008-12a have displayed remarkably homogeneous multiwavelength properties: (i) from a faint peak, the optical light curve declined rapidly by two magnitudes in less than two days, (ii) early spectra showed initial high velocities that slowed down significantly within days and displayed clear He/N lines throughout, and (iii) the supersoft X-ray source (SSS) phase of the nova began extremely early, six days after eruption, and only lasted for about two weeks. In contrast, the peculiar 2016 eruption was clearly different. Here we report (i) the considerable delay in the 2016 eruption date, (ii) the significantly shorter SSS phase, and (iii) the brighter optical peak magnitude (with a hitherto unobserved cusp shape). Early theoretical models suggest that these three different effects can be consistently understood as caused by a lower quiescence mass accretion rate. The corresponding higher ignition mass caused a brighter peak in the free-free emission model. The less massive accretion disk experienced greater disruption, consequently delaying the re-establishment of effective accretion. Without the early refueling, the SSS phase was shortened. Observing the next few eruptions will determine whether the properties of the 2016 outburst make it a genuine outlier in the evolution of M31N 2008-12a. 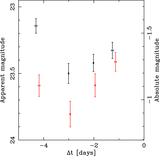