IRIS Observations of Magnetic Interactions in the Solar Atmosphere between Preexisting and Emerging Magnetic Fields. I. Overall Evolution

We report multiwavelength ultraviolet observations taken with the IRIS satellite, concerning the emergence phase in the upper chromosphere and transition region of an emerging flux region (EFR) embedded in the preexisting field of active region NOAA 12529 in the Sun. IRIS data are complemented by full-disk observations of the Solar Dynamics Observatory satellite, relevant to the photosphere and the corona. The photospheric configuration of the EFR is also analyzed by measurements taken with the spectropolarimeter on board the Hinode satellite, when the EFR was fully developed. Recurrent intense brightenings that resemble UV bursts, with counterparts in all coronal passbands, are identified at the edges of the EFR. Jet activity is also observed at chromospheric and coronal levels, near the observed brightenings. The analysis of the IRIS line profiles reveals the heating of dense plasma in the low solar atmosphere and the driving of bidirectional high-velocity flows with speed up to 100 km s-1 at the same locations. Compared with previous observations and numerical models, these signatures suggest evidence of several long-lasting, small-scale magnetic reconnection episodes between the emerging bipole and the ambient field. This process leads to the cancellation of a preexisting photospheric flux concentration and appears to occur higher in the atmosphere than usually found in UV bursts, explaining the observed coronal counterparts. 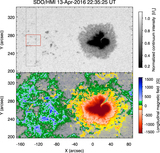