The chemical composition of solar and stellar atmospheres differs from the composition of their photospheres. Abundances of elements with low first ionization potential (FIP) are enhanced in the corona relative to high-FIP elements with respect to the photosphere. This is known as the FIP effect and it is important for understanding the flow of mass and energy through solar and stellar atmospheres. We used spectroscopic observations from the Extreme-ultraviolet Imaging Spectrometer on board the Hinode observatory to investigate the spatial distribution and temporal evolution of coronal plasma composition within solar emerging flux regions inside a coronal hole. Plasma evolved to values exceeding those of the quiet-Sun corona during the emergence/early-decay phase at a similar rate for two orders of magnitude in magnetic flux, a rate comparable to that observed in large active regions (ARs) containing an order of magnitude more flux. During the late-decay phase, the rate of change was significantly faster than what is observed in large, decaying ARs. Our results suggest that the rate of increase during the emergence/early-decay phase is linked to the fractionation mechanism that leads to the FIP effect, whereas the rate of decrease during the later decay phase depends on the rate of reconnection with the surrounding magnetic field and its plasma composition. 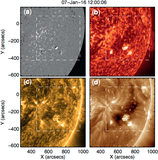