We present the first VLBI observations of a Galactic water maser (in Cepheus A) made with a very long baseline interferometric array involving the RadioAstron Earth-orbiting satellite station as one of its elements. We detected two distinct components at -16.9 and 0.6 km s-1 with a fringe spacing of 66 μas. In total power, the 0.6 km s-1 component appears to be a single Gaussian component of strength 580 Jy and width of 0.7 km s-1. Single-telescope monitoring showed that its lifetime was only eight months. The absence of a Zeeman pattern implies the longitudinal magnetic field component is weaker than 120 mG. The space-Earth cross power spectrum shows two unresolved components smaller than 15 μas, corresponding to a linear scale of 1.6 × 1011 cm, about the diameter of the Sun, for a distance of 700 pc, separated by 0.54 km s-1 in velocity and by 160 ± 35 μas in angle. This is the smallest angular structure ever observed in a Galactic maser. The brightness temperatures are greater than 2 × 1014 K, and the line widths are 0.5 km s-1. Most of the flux (about 87%) is contained in a halo of angular size of 400 ± 150 μas. This structure is associated with the compact H II region HW3diii. We have probably picked up the most prominent peaks in the angular size range of our interferometer. We discuss three dynamical models: (1) Keplerian motion around a central object, (2) two chance overlapping clouds, and (3) vortices caused by flow around an obstacle (i.e., von Kármán vortex street) with a Strouhal number of about 0.3. 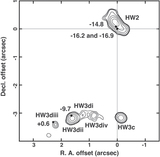