The multi-fluid modeling of high-frequency waves in partially ionized plasmas has shown that the behavior of magnetohydrodynamic waves in the linear regime is heavily influenced by the collisional interaction between the different species that form the plasma. Here, we go beyond linear theory and study large-amplitude waves in partially ionized plasmas using a nonlinear multi-fluid code. It is known that in fully ionized plasmas, nonlinear Alfvén waves generate density and pressure perturbations. Those nonlinear effects are more pronounced for standing oscillations than for propagating waves. By means of numerical simulations and analytical approximations, we examine how the collisional interaction between ions and neutrals affects the nonlinear evolution. The friction due to collisions dissipates a fraction of the wave energy, which is transformed into heat and consequently raises the temperature of the plasma. As an application, we investigate frictional heating in a plasma with physical conditions akin to those in a quiescent solar prominence. 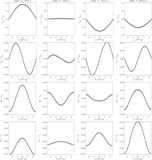