The kilonova associated with GW170817 displayed early blue emission, which has been interpreted as a signature of either radioactive decay in low-opacity ejecta, relativistic boosting of radioactive decay in high-velocity ejecta, the cooling of material heated by a wind or by a “cocoon” surrounding a jet, or a combination thereof. Distinguishing between these mechanisms is important for constraining the ejecta components and their parameters, which tie directly into the physics we can learn from these events. I compile published ultraviolet, optical, and infrared light curves of the GW170817 kilonova and examine whether the combined data set can be used to distinguish between early-emission models. The combined optical data show an early rise consistent with radioactive decay of low-opacity ejecta as the main emission source, but the subsequent decline is fit well by all models. A lack of constraints on the ultraviolet flux during the first few hours after discovery allows for both radioactive decay and other cooling mechanisms to explain the early bolometric light curve. This analysis demonstrates that early (few hours after merger) high-cadence optical and ultraviolet observations will be critical for determining the source of blue emission in future kilonovae. 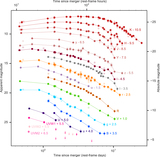