We use Hα imaging spectroscopy taken via the Swedish 1 m Solar Telescope to investigate the occurrence of fan-shaped jets at the solar limb. We show evidence for near-simultaneous photospheric reconnection at a sunspot edge leading to the jets appearance, with upward velocities of 30 km s-1, and extensions up to 8 Mm. The brightening at the base of the jets appears recurrent, with a periodicity matching that of the nearby sunspot penumbra, implying running penumbral waves could be the driver of the jets. The jets’ constant extension velocity implies that a driver counteracting solar gravity exists, possibly as a result of the recurrent reconnection erupting material into the chromosphere. These jets also show signatures in higher temperature lines captured from the Solar Dynamics Observatory, indicating a very hot jet front, leaving behind optically thick cool plasma in its wake. 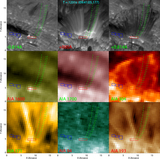