We investigate deuterium chemistry coupled with the nuclear spin-state chemistry of H2 and {{{H}}}3+ in protoplanetary disks. Multiple paths of deuterium fractionation are found; exchange reactions with D atoms, such as HCO+ + D, are effective in addition to those with HD. In a disk model with grain sizes appropriate for dark clouds, the freeze-out of molecules is severe in the outer midplane, while the disk surface is shielded from UV radiation. Gaseous molecules, including DCO+, thus become abundant at the disk surface, which tends to make their column density distribution relatively flat. If the dust grains have grown to millimeter size, the freeze-out rate of neutral species is reduced and the abundances of gaseous molecules, including DCO+ and N2D+, are enhanced in the cold midplane. Turbulent diffusion transports D atoms and radicals at the disk surface to the midplane, and stable ice species in the midplane to the disk surface. The effects of turbulence on chemistry are thus multifold; while DCO+ and N2D+ abundances increase or decrease depending on the regions, HCN and DCN in the gas and ice are greatly reduced at the innermost radii, compared to the model without turbulence. When cosmic rays penetrate the disk, the ortho-to-para ratio (OPR) of H2 is found to be thermal in the disk, except in the cold (≲10 K) midplane. We also analyze the OPR of {{{H}}}3+ and H2D+, as well as the main reactions of H2D+, DCO+, and N2D+, in order to analytically derive their abundances in the cold midplane. 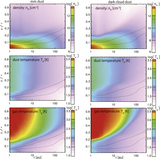