Coronal cavities have previously been observed to be associated with long-lived quiescent filaments and are thought to correspond to the associated magnetic flux rope. Although the standard flare model predicts a coronal cavity corresponding to the erupting flux rope, these have only been observed using broadband imaging data, restricting an analysis to the plane-of-sky. We present a unique set of spectroscopic observations of an active region filament seen erupting at the solar limb in the extreme ultraviolet. The cavity erupted and expanded rapidly, with the change in rise phase contemporaneous with an increase in nonthermal electron energy flux of the associated flare. Hot and cool filamentary material was observed to rise with the erupting flux rope, disappearing suddenly as the cavity appeared. Although strongly blueshifted plasma continued to be observed flowing from the apex of the erupting flux rope, this outflow soon ceased. These results indicate that the sudden injection of energy from the flare beneath forced the rapid eruption and expansion of the flux rope, driving strong plasma flows, which resulted in the eruption of an under-dense filamentary flux rope. 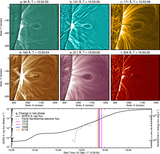