Element abundance ratios of magnesium to neon (Mg/Ne) and neon to oxygen (Ne/O) in the transition region of the quiet Sun have been derived by re-assessing previously published data from the Coronal Diagnostic Spectrometer on board the Solar and Heliospheric Observatory in the light of new atomic data. The quiet Sun Mg/Ne ratio is important for assessing the effect of magnetic activity on the mechanism of the first ionization potential (FIP) effect, while the Ne/O ratio can be used to infer the solar photospheric abundance of neon, which cannot be measured directly. The average Mg/Ne ratio is found to be 0.52 ± 0.11, which applies over the temperature region 0.2-0.7 MK, and is consistent with the earlier study. The Ne/O ratio is, however, about 40% larger, taking the value 0.24 ± 0.05 that applies to the temperature range 0.08-0.40 MK. The increase is mostly due to changes in ionization and recombination rates that affect the equilibrium ionization balance. If the Ne/O ratio is interpreted as reflecting the photospheric ratio, then the photospheric neon abundance is 8.08 ± 0.09 or 8.15 ± 0.10 (on a logarithmic scale for which hydrogen is 12), according to whether the oxygen abundances of M. Asplund et al. or E. Caffau et al. are used. The updated photospheric neon abundance implies a Mg/Ne FIP bias for the quiet Sun of 1.6 ± 0.6. 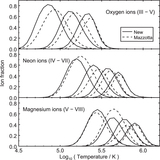