This paper presents Very Long Baseline Array (VLBA) observations of 13 double-peaked [O III] emission-line type-2 active galactic nuclei (AGNs) at redshifts 0.06 < z < 0.41 (with a median redshift of z ∼ 0.15) identified in the Sloan Digital Sky Survey. Such double-peaked emission-line objects may result from jets or outflows from the central engine or from a dual AGN. The VLBA provides an angular resolution of ≲10 pc at the distance of many of these galaxies, sufficient to resolve the radio emission from extremely close dual AGNs and to contribute to understanding the origin of double-peaked [O III] emission lines. Of the 13 galaxies observed at 3.6 cm (8.4 GHz), we detect six at a 1σ sensitivity level of ∼0.15 mJy beam-1, two of which show clear jet structures on scales ranging from a few milliarcseconds to tens of milliarcseconds (corresponding to a few pc to tens of pc at a median redshift of 0.15). We suggest that radio-loud, double-peaked emission-line type-2 AGNs may be indicative of jet produced structures, but a larger sample of double-peaked [O III] AGNs with high angular resolution radio observations will be required to confirm this suggestion. 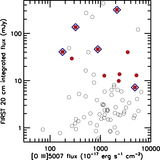