The galaxy integrated Hα star formation rate-stellar mass relation, or SFR(global)-M *(global) relation, is crucial for understanding star formation history and evolution of galaxies. However, many studies have dealt with SFR using unresolved measurements, which makes it difficult to separate out the contamination from other ionizing sources, such as active galactic nuclei and evolved stars. Using the integral field spectroscopic observations from SDSS-IV MaNGA, we spatially disentangle the contribution from different Hα powering sources for ∼1000 galaxies. We find that, when including regions dominated by all ionizing sources in galaxies, the spatially resolved relation between Hα surface density (ΣHα (all)) and stellar mass surface density (Σ*(all)) progressively turns over at the high Σ*(all) end for increasing M *(global) and/or bulge dominance (bulge-to-total light ratio, B/T). This in turn leads to the flattening of the integrated Hα(global)-M *(global) relation in the literature. By contrast, there is no noticeable flattening in both integrated Hα(H II)-M *(H II) and spatially resolved ΣHα (H II)-Σ*(H II) relations when only regions where star formation dominates the ionization are considered. In other words, the flattening can be attributed to the increasing regions powered by non-star-formation sources, which generally have lower ionizing ability than star formation. An analysis of the fractional contribution of non-star-formation sources to total Hα luminosity of a galaxy suggests a decreasing role of star formation as an ionizing source toward high-mass, high-B/T galaxies and bulge regions. This result indicates that the appearance of the galaxy integrated SFR-M * relation critically depends on their global properties (M *(global) and B/T) and relative abundances of various ionizing sources within the galaxies. 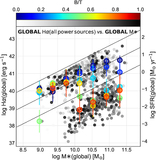