Cracking the Conundrum of F-supergiant Coronae

Chandra X-ray and HST far-ultraviolet (FUV) observations of three early-F supergiants have shed new light on a previous puzzle involving a prominent member of the class: α Persei (HD 20902: F5 Ib). The warm supergiant is a moderately strong, hard coronal (T∼ {10}7 K) X-ray source, but has 10 times weaker “subcoronal” Si IV 1393 Å (T∼ 8× {10}4 K) emissions than early-G supergiants of similar high-energy properties. The α Per X-ray excess was speculatively ascribed to a close-in hyperactive G-dwarf companion, which could have escaped previous notice, lost in the glare of the bright star. However, a subsequent dedicated multi-wavelength imaging campaign failed to find any evidence for a resolved secondary. The origin of the α Per high-energy dichotomy then devolved to (1) an unresolved companion or (2) intrinsic coronal behavior. Exploring the second possibility, the present program has found that early-F supergiants do appear to belong to a distinct coronal class, characterized by elevated X-ray/FUV ratios, although sharing some similarities with Cepheid variables in their transitory X-ray “high states.” Remarkably, the early-F supergiants now are seen to align with the low-activity end of the X-ray/FUV sequence defined by late-type dwarfs, suggesting that the disjoint behavior relative to the G supergiants might be attributed to thinner outer atmospheres on the F types, as in dwarfs, but in this case perhaps caused by a weakened “ionization valve” effect due to overly warm photospheres. 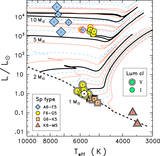