V582 Aur is an FU Ori-type young eruptive star in outburst since ∼1985. The eruption is currently in a relatively constant plateau phase, with photometric and spectroscopic variability superimposed. Here we will characterize the progenitor of the outbursting object, explore its environment, and analyze the temporal evolution of the eruption. We are particularly interested in the physical origin of the two deep photometric dips, one that occurred in 2012 and one that is ongoing since 2016. We collected archival photographic plates and carried out new optical, infrared, and millimeter-wave photometric and spectroscopic observations between 2010 and 2018, with a high sampling rate during the current minimum. Besides analyzing the color changes during fading, we compiled multiepoch spectral energy distributions and fitted them with a simple accretion disk model. Based on pre-outburst data and a millimeter continuum measurement, we suggest that the progenitor of the V582 Aur outburst is a low-mass T Tauri star with average properties. The mass of an unresolved circumstellar structure, probably a disk, is 0.04 M ⊙. The optical and near-infrared spectra demonstrate the presence of hydrogen and metallic lines, show the CO band head in absorption, and exhibit a variable Hα profile. The color variations strongly indicate that both the ∼1 yr long brightness dip in 2012 and the current minimum since 2016 are caused by increased extinction along the line of sight. According to our accretion disk models, the reddening changed from A V = 4.5 to 12.5 mag, while the accretion rate remained practically constant. Similarly to the models of the UXor phenomenon of intermediate- and low-mass young stars, orbiting disk structures could be responsible for the eclipses. 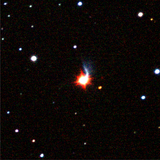