NASA’s New Horizons spacecraft’s voyage through the Pluto system centered on 2015 July 14 provided images of Pluto’s small satellites Nix and Hydra at viewing angles unattainable from Earth. Here, we present solar phase curves of the two largest of Pluto’s small moons, Nix and Hydra, observed by the New Horizons LOng Range Reconnaissance Imager and Multi-spectral Visible Imaging Camera, which reveal the scattering properties of their icy surfaces in visible light. Construction of these solar phase curves enables comparisons between the photometric properties of Pluto’s small moons and those of other icy satellites in the outer solar system. Nix and Hydra have higher visible albedos than those of other resonant Kuiper Belt objects and irregular satellites of the giant planets, but not as high as small satellites of Saturn interior to Titan. Both Nix and Hydra appear to scatter visible light preferentially in the forward direction, unlike most icy satellites in the outer solar system, which are typically backscattering. 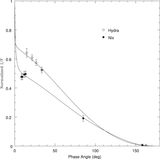